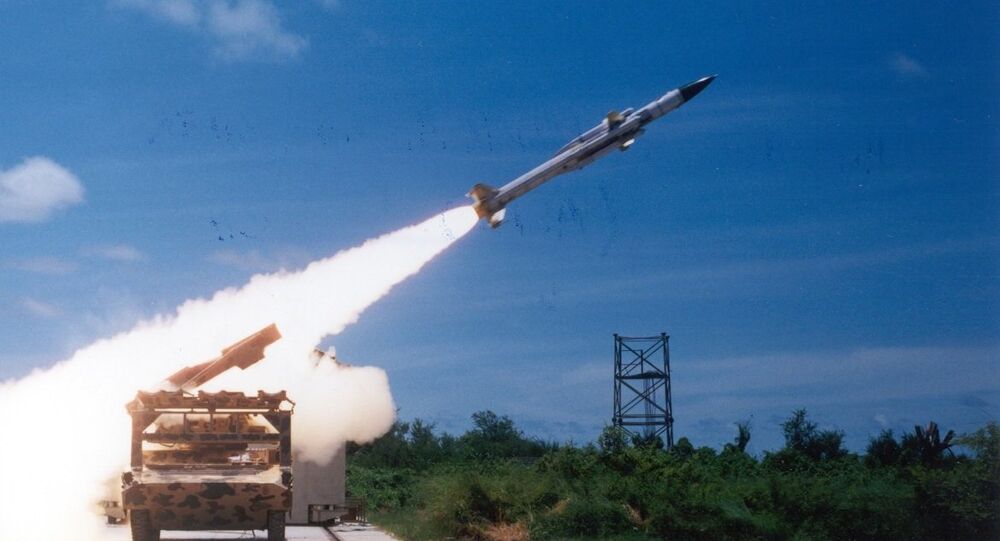 New Delhi (Sputnik): A day after the leaders of India and Pakistan established their first communication as a friendly gesture towards peace since the escalation of tensions in February, the Indian military test fired a surface-to-air defence missile system — Akash 1S — fitted with a home-grown seeker on Monday.

The 1S is the new version of the Akash missile, which comes fitted with an indigenous seeker that enhanced the electronic counter counter-measures capability, and better performance against highly agile targets.

The Akash can fly at supersonic speeds, ranging from Mach 2.8 to 3.5, and engage aerial targets up to a range of 30 km.

© AP Photo / Saurabh Das
India Successfully Test Fires 500 Kg Guided Bomb Near Pakistani Border
Congratulating the Indian defence scientists of the state-funded Defence Research and Development (DRDO), Dharmendra Pradhan, a senior cabinet minister of the government of India, said this version of the missile is fitted with an indigenous seeker "adding not only to missile lethality but also enhancing India's defence manufacturing capabilities".

Akash 1S retains the command guidance of the original missile for the initial part of target pursuit. The RF seeker gives the missile additional range. The Akash Mk-1S system features 360 degree coverage with a compact configuration and reduced signature.

This missile is being inducted into the Indian Army as short range surface to air missile. The system is capable of simultaneously engaging multiple targets and providing comprehensive short range missile cover to the vulnerable assets in the field force of the army. The 720 kg, 5.78-metre long missile has a diametre of 35 cm and a length of 5.78 metres. It has a 60 kg warhead. Because the missile has an integrated ram-rocket, its maneuverability is very high.

© AP Photo / Anjum Naveed
Pakistan Test-Launches Nuke Capable Missile Amid Tensions With India
On 23 May, Pakistan too successfully launched its surface-to-surface Shaheen-II ballistic missile, "capable of carrying both conventional and nuclear warheads up to a range of 1,500 kms".

Post-Shaheen launch, which was considered as tit-for-tat missile launch in the region, Russian Deputy Foreign Minister Sergey Ryabkov said Russia does not see any obstacles for Pakistan to develop its missile programme.

A day after the Shaheen II launch, the Indian military claimed to have successfully tested a guided 500-kg bomb, capable of destroying any moving target with steering rudders during the free-fall from an aircraft.

The testing of weapons by the two neighbouring nations started on the day Narendra Modi was announced victorious in General Elections.

Last week, Islamabad made "a rare exception" for Indian External Affairs Minister Sushma Swaraj, allowing her to fly directly in Pakistani airspace on her way to the SCO meeting.

On 26 May, Pakistan Prime Minister Imran Khan called his counterpart Modi over phone and stressed the importance of creating trust and building an environment free of violence in the region.