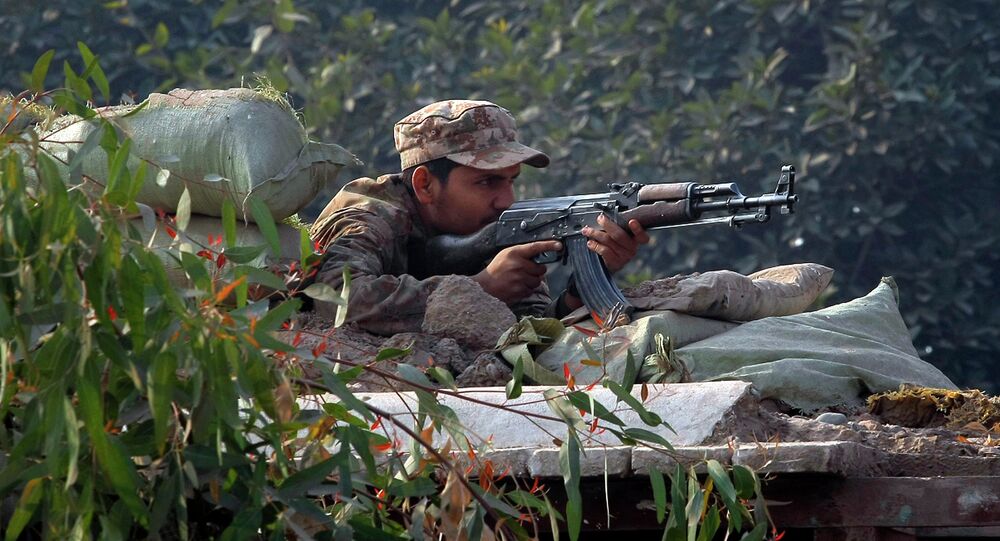 At least one Pakistani soldier was killed in a skirmish with terrorists, who attempted to raid Makki Garh Post in Shawal Valley of North Waziristan, local media reported Monday.

Two terrorists were killed while three others managed to escape, according to the Inter-Services Public Relations (ISPR).

According to the ISPR, local Pakistani forces effectively repelled the attack and in exchange of fire, a Pakistani soldier was killed. On Sunday, Pakistani army reportedly discovered, during a patrolling in the same area, five bodies with bullet wounds. Local security forces have launched the investigation into the incident. According to the ISPR, the identification of the corpses is underway.

No terrorist group has reportedly claimed responsibility for the attack.

© AFP 2020 / Tauseef MUSTAFA
Five, Including One Indian Soldier Killed in Fierce Gun Battle in Kashmir
Earlier in May, one security officer was killed when three unidentified armed individuals stormed the five-star Pearl Continental (PC) hotel in the southern Pakistani city of Gwadar, located in the province of Balochistan.

According to media reports, the Balochistan Liberation Army separatist organization, qualified as a terrorist group by Pakistan, has claimed responsibility for the attack in the province of Balochistan.

Baloch separatists have been reportedly struggling to create an independent state since 1947.