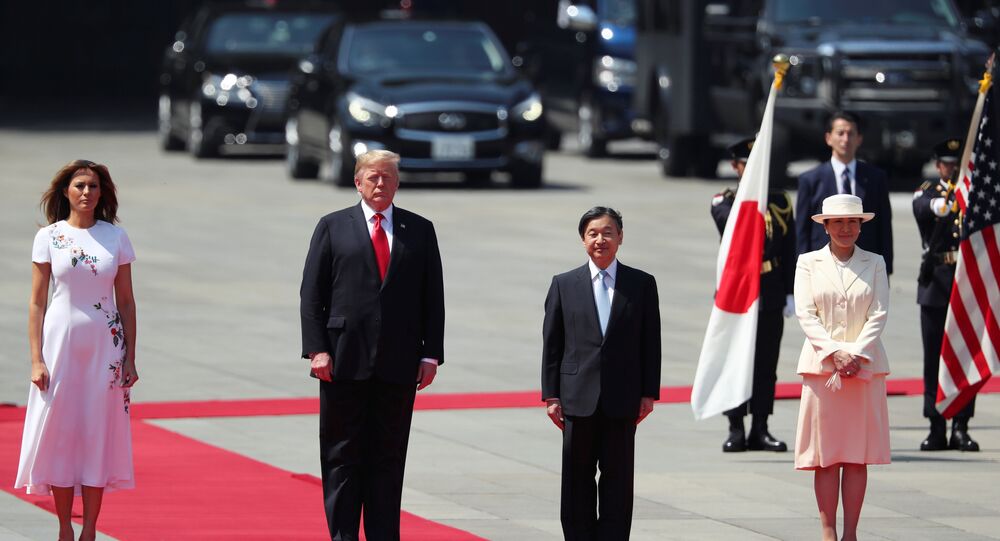 US President Donald Trump met with new Japanese Emperor Naruhito and Empress Masako on Monday at the imperial palace in Tokyo as part of a formal welcoming ceremony broadcast live on national television.

Trump became the first foreign leader to be received by the Japanese monarch since he inherited the throne earlier this month after his father, Akihito, stepped down in the first abdication by a Japanese emperor in two centuries.

"It's over 200 years since something like this has happened. So it's a great honour to be representing the United States", Trump said at a welcoming dinner with Japanese Prime Minister Shinzo Abe earlier on Sunday, according to Reuters.

In between visits with the monarch, Trump is reportedly slated to hold talks with Abe, with whom he played golf, attended a sumo tournament and dined on Sunday.

© AFP 2020 / Brendan Smialowski
Melania Trump's Facial Expressions at Tokyo Sumo Match Leave Twitter in Stitches
Trump said on Sunday that Washington and Tokyo were progressing very well in their trade talks, noting, however, that many issues would not be resolved until Japan holds elections to its upper chamber in July.

"Great progress being made in our Trade Negotiations with Japan. Agriculture and beef heavily in play. Much will wait until after their July elections [to the Japanese upper house] where I anticipate big numbers!", Trump tweeted.

Trump now reportedly wants to secure a bilateral trade agreement with Tokyo that would allow the United States to boost its agricultural exports to Japan. Tokyo, in turn, wants to prevent Trump from slamming import duties on Japanese cars and auto parts, which are one of the most important export products for Tokyo.