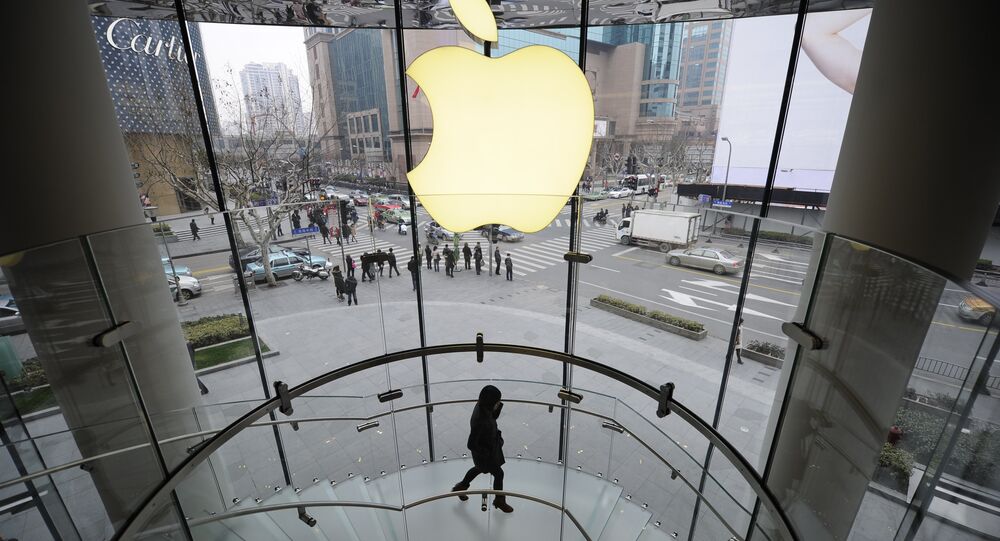 The founder of the Chinese technology giant Huawei, Ren Zhengfei, has said in an interview with Bloomberg that he would be "the first to protest" if Beijing retaliates against the US-based tech giant Apple.

A Bloomberg reporter has asked the Huawei CEO in an interview whether he would retaliate against Apple amid "calls by some in China" to take countermeasures against the US company.

"That will not happen, first of all. And second of all, if that happens, I'll be the first to protest. Apple is the world's leading company. If there was no Apple, there would be no mobile internet. If there was no Apple to help show us the world, we would not see the beauty of this world. Apple is my teacher. It's advancing in front of us. As a student, why should I oppose my teacher? I would never do that", Ren Zhengfei has told Bloomberg in an interview, published on Sunday.

© REUTERS / Eric Gaillard
Huawei Crackdown: China Prepares Law That May Ban US Tech Firms From Its Market − Report
US President Donald Trump issued an executive order earlier in May that added Huawei and its 70 affiliates to a trade blacklist, thereby restricting its activity in the country. US companies are hence required to receive permission before trading with the telecom company.

As a result, Google had to suspend business operations with Huawei, including the transfer of all hardware, software and technical services, except those publicly available via open source licensing. This move has already impacted the telecom giant, with several mobile carriers, such as UK Vodafone and EE suspending their launches of new Huawei products.

The standoff between Huawei and Apple was sparked by the December arrest of Huawei Chief Financial Officer Meng Wanzhou, the daughter of Huawei's founder in Canada, for alleged violations of US sanctions on Iran. Beijing decried the move and demanded that Canada immediately release the Chinese national.

© AFP 2021 / HECTOR RETAMAL
Apple Warned of Troubles in China Amid US Crackdown on Huawei
In January, the Chinese telecom giant punished staffers who used an iPhone to send an official company tweet amid a standoff between the two tech giants. In an internal memo, published online by Chinese media, Huawei said those responsible were demoted and had their salaries slashed by $730.

Meanwhile, US Secretary of State Mike Pompeo claimed on Thursday that the Chinese tech giant allegedly had close links to not only the Chinese government but also to the Chinese Communist Party. He said that these ties significantly threatened any US-related information that passed via Huawei's devices. Pompeo also said the State Department expected more companies worldwide to cut ties with Huawei in the future.

The Chinese Foreign Ministry said Friday that Pompeo's remarks were made in an attempt to stir up ideological resistance against the company.

Last year, the United States, Australia, Japan, and New Zealand banned the company from participating in government contracts due to security concerns. Huawei has vehemently denied all allegations of spying.