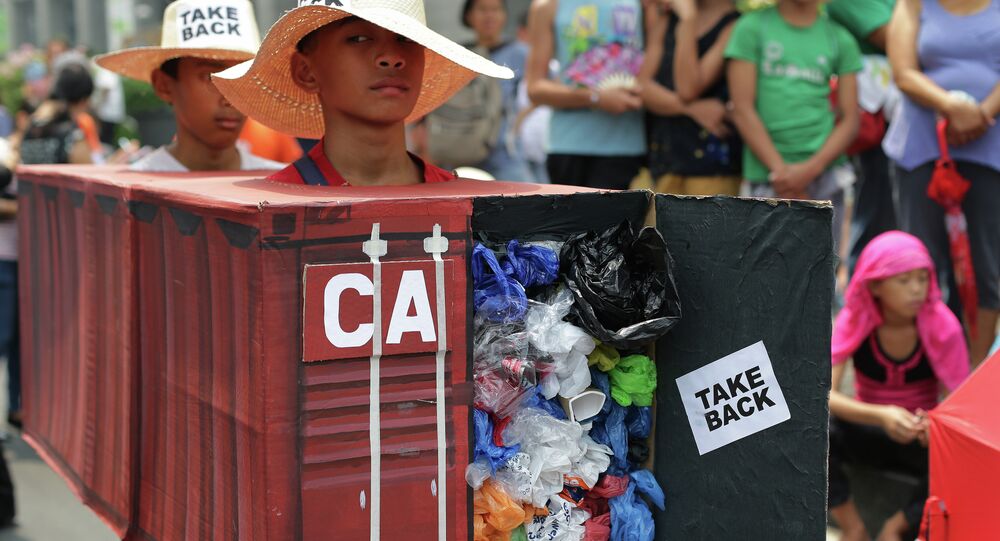 MOSCOW (Sputnik) - Philippine President Rodrigo Duterte has rejected Canada’s offer to ship back by the end of June tonnes of trash that was dumped in the archipelago years ago, his spokesman said on Thursday.

"They said it will [happen by] the end of June. The president will not agree with that and I understand from [Finance] Secretary [Carlos] Dominguez that it will be shipped out soon", Salvador Panelo was quoted as saying at a press briefing by the Manila Bulletin daily.

Canadian Environment Minister Catherine McKenna said on Wednesday the government hired a private firm to bring back the offending trash, which is a mix of plastic and household waste.

© Photo : Ban Toxics
Canada Responds to Duterte's War Threat Over Philippine Garbage Issue
Dozens of containers with trash, labeled as recyclable materials, were shipped to the Philippines by a private Canadian entity in 2013 and 2014 in what Ottawa said was a commercial deal.

However, the containers, which arrived in Manila, turned out to be filled with household trash, among other things, instead. The Philippines have since been trying the make Canada ship the trash back.

The Philippines recalled its ambassador in Ottawa earlier this month in the escalating row over the trash pile. Duterte has threatened to ship tonnes of garbage to Canada and dump it in Canadian territorial waters. Panelo told reporters this could happen this week or by the end of May.

Canada to Take Back Waste From Philippines – Ottawa