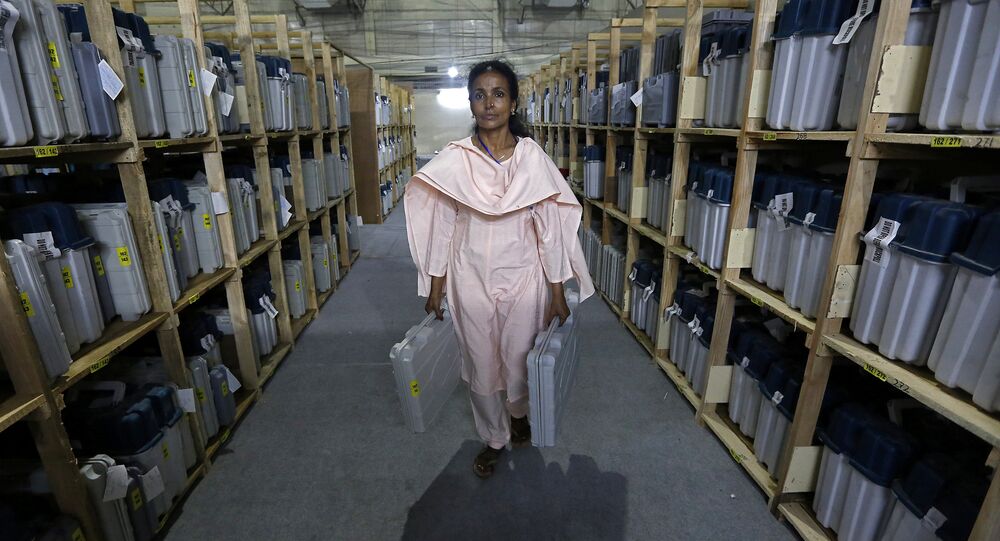 During state assembly elections in the past, some opposition parties have alleged that the electronic voting machines (EVM) were being tampered with to favour the governing Bharatiya Janata Party. But many of these parties have also won seats after being voted through the same EVMs.

New Delhi (Sputnik): The Election Commission of India (ECI) on Tuesday rebuffed allegations by a section of media and opposition parties that electronic voting machines (EVMs) used in the parliamentary elections were being tampered with to favour the incumbent government.

In an official statement, the Election Commission sought to clarify after coming across certain complaints of alleged movement of EVMs, particularly of efforts to replace the polled EVMs in the strong rooms, that were making the rounds in a portion of media.

"Election Commission of India would like to emphatically and unambiguously clarify that all such reports and allegations are absolutely false, and factually incorrect. The visuals seen viral on media do not pertain to any EVMs used during the polls", the EC statement said.

© REUTERS / Rupak De Chowdhuri/File Photo
Analyst Outlines Three Possible Difficulties in Counting Votes For India's General Elections
Despite the assurance of the commission, 22 parties of opposition on Tuesday submitted a memorandum before the ECI. It requested that verification of VVPAT (voter-verified paper audit trail) slips of five randomly identified polling stations should be done prior to the initiation of vote counting and not after the last round of counting.

Voter-Verified Paper Audit Trail (VVPAT) system enables EVMs to record each vote cast by generating the EVM slip. This is the first time that this system has been implemented in the Indian parliamentary elections.

READ MORE: Indian Exit Polls: How Much Relevant They Are?

The opposition leaders in their memorandum have also demanded that if any discrepancy is found anywhere during VVPAT verification, then counting of all paper slips of VVPATs of all polling stations belonging to that assembly segment should be done.

Speaking to the media outside the ECI office, Indian National Congress leader Abhishek Manu Singhvi said: "We came here to meet the ECI today, as we have raised same issues (about EVM tampering) constantly in the last 1.5 months. We asked EC why have they not responded to us. ECI has assured that they would meet again tomorrow to discuss these two important issues".