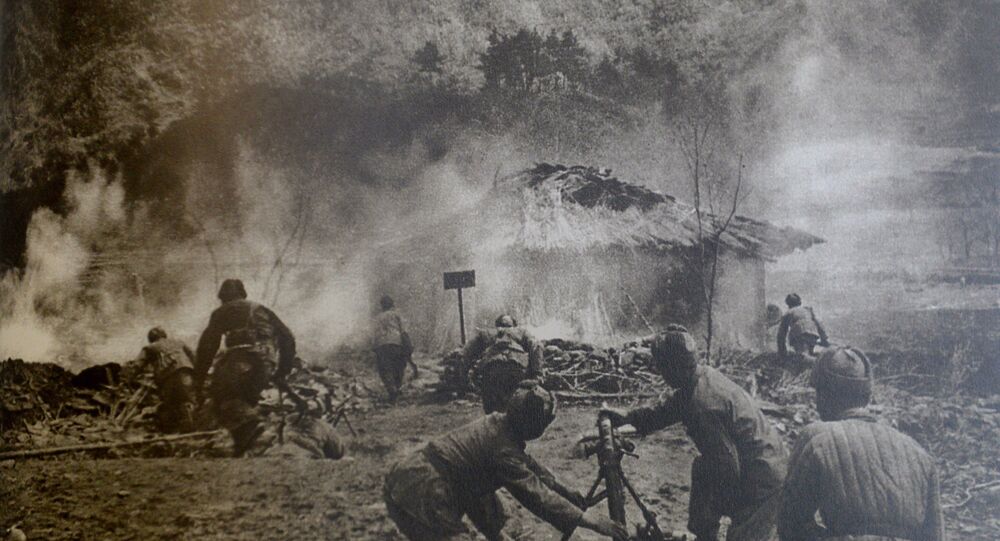 In response to the widening gap between Washington and Beijing, a major Chinese TV broadcaster has pulled Hollywood films and Chinese films with scenes shot in the US from its schedules, replacing them with classic Chinese war films showing Chinese troops defeating Americans.

China Movie Channel, better known as CCTV-6, has begun filling its prime evening slots with classic anti-American Chinese war films. "Heroic Sons and Daughters" (1964), "Battle on Shangganling Mountain" (1954) and "Surprise Attack" (1960) will all be featured from May 17 to 19, What's on Weibo reported.

The three movies being run are part of a genre called "Resist America, Help North Korea" and recount the Chinese intervention in the 1950-53 Korean War on the side of the Democratic People's Republic of Korea (DPRK). In October 1950, as the US invasion of the DPRK threatened to overrun the country, Beijing intervened, sending 270,000 Chinese troops in the newly formed People's Volunteer Army (PVA) across the Yalu River in a devastating counteroffensive that drove the US-aligned forces out of the country.

The move saved the DPRK from destruction — something Chinese communist leaders felt they owed Pyongyang, which had aided them during critical battles several years earlier in their struggle against Chinese nationalist forces.

#China state TV airs anti-U.S. films in prime time over the weekend, preparing the public here for a protracted trade war. (All 3 movies about Chinese triumph during the Korean War.) pic.twitter.com/Xabmlw4NmN

​"Battle on Shangganling Mountain" is perhaps the most evocative of the three, Asia Times notes, as it depicts the Battle of Triangle Hill, the decisive battle near what is today the Demilitarized Zone separating the two Koreas, which forced the US to seek a ceasefire.

© AFP 2021 / Saul Loeb
Ex-CIA Officer Gets 20 Years in Prison for Trying to Spy for China, US Justice Department Says

During the fight, undersupplied Chinese troops hold out against all odds, holding their position for 24 straight days until their relief arrives, all in the face of the absolute superiority of US ground artillery and air power.

The wave of anti-American sentiment follows US President Donald Trump's decision last week to raise a 10% tariff on $200 billion worth of Chinese imports to a 25% tax, and his decision to ban the use devices from Chinese tech giant Huawei in the US. On Monday, numerous US-based tech giants, following Google's lead, pledged to end business with Huawei, Sputnik reported.

CCTV 6 has gone trending on Chinese social media today for changing its schedule and playing three anti-American movies for three days in a row, sending out a clear anti-US message while the trade war is heating up. Read: https://t.co/w5aju3vMDs pic.twitter.com/21mEfC5Ha5

​The other films are no less patriotic. "Heroic Sons and Daughters" depicts a PVA commissar who encounters his lost son and daughter in the DPRK and shows North Korea's Korean People's Army (KPA) and Chinese soldiers fighting side-by-side for the liberation of the country. "Surprise Attack" is a sort of Chinese parallel of the British-American World War II classic "Bridge Over the River Kwai," except the bridge is Kangping Bridge, and destroying it will cut the American supply chain and allow the PVA and KPA to attack them with a chance of winning.

Global Times noted that posters on Chinese social media site Weibo generally approved of the broadcast changes, saying, "They don't make movies like this anymore," and "It's good for the younger generation to also see these classics."

However, some others felt it was a bit stale to show these old films today, and decried their propagandistic value.

"It seems that there are no new anti-American TV series or movies now, so they've come up with these old films to brainwash us." Another person said, "This kind of brainwashing is not useful," Global Times noted.