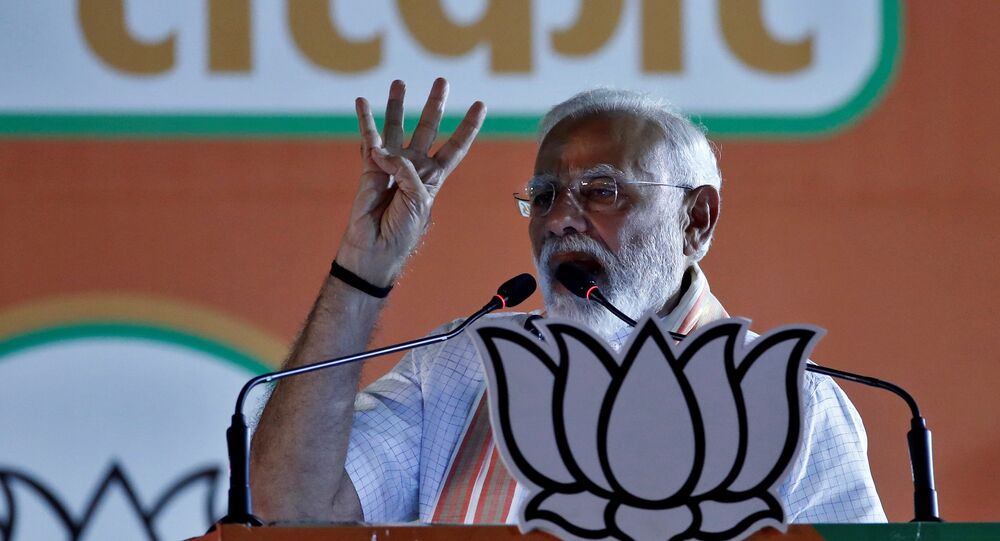 Modi, who was mercilessly trolled a couple of days ago for his comments that the 26 February Indian air strike in Pakistan was carried out at his behest “as clouds would prevent radar detection”, came under fire online again for claiming he used a digital camera and email even when these were not available.

New Delhi (Sputnik): Indian Prime Minister Narendra Modi has left many in the country amused by claiming that he used emails and a digital camera in 1980s. The claim appears to have served as fresh fodder for some trolls and baiters in the ongoing parliamentary election season.

Modi, during an interview to a media house, stated that he used a digital camera in 1988 during a public meet of senior party leader Lal Krishan Advani.

"It was in 1987-88 that I used the digital camera for the first time. Advani (his party leader) was addressing a meeting in Gujarat. I clicked his photograph and emailed it to Delhi. The photo was published the next day and Advani was surprised that his coloured photograph was published".

Is there no end to Modi’s lies? He says a took a digital photograph in 1988 and transmitted it by email. (First digital camera was sold by Nikon in 1987 and commercial emails were introduced in 1990-95) pic.twitter.com/3kKazQAMGQ

On the day the interview was broadcast, the trolling spree on Twitter was relentless.

Modi claims that he had a digital camera in 1987-88 and an email account in 1988. He even sent a color photo as an email attachment within India in 1988 too.
Modi suffers from serious illness and he needs proper medical care!

Any guesses as to what @narendramodi email id was in 1988?

Modi ahead of his times:

Used digital camera when it was not available

Sent email when the internet did not exist

The radar of his mind penetrated the future!

Modi invented Digital camera, EMail, like gas from the gutter & clouds which could not be penetrated by radars. Ask any Bhakt. https://t.co/sPrmrSaFmZ

Mr Modi is the 1st PM to have

1. used E-mail service 7 years before it was launched

2. used Digital camera 8 years before it was introduced

3. Did the Air strike himself despite heavy CLOUD

© AP Photo / Aijaz Rahi
Modi Mocked for Saying Indian Jets Could Use Clouds to Hide From Pakistani Radar
Modi has recently been mocked online and criticised by the opposition over another controversial comment. In a weekend interview, he said cloud cover was able to help the country's warplanes evade Pakistani radars during the Balakot strikes in late February.

When reacting to the statement, Pakistani Foreign Minister Shah Mehmood Qureshi noted that the country's air force would bring down Indian warplanes despite them emerging from “behind the clouds”.

The India-Pakistan tensions were provoked by a February terror attack killing 40 Indian security personnel claimed by a Pakistan-based terrorist group. The escalation culminated in the 27 February dogfight which saw the two countries allegedly lose one warplane each, one day after the Indian Air Force conducted air strikes against a suspected Jaish-e Mohammad training camp in Pakistan’s Balakot, reportedly eliminating a number of facilities and militants.