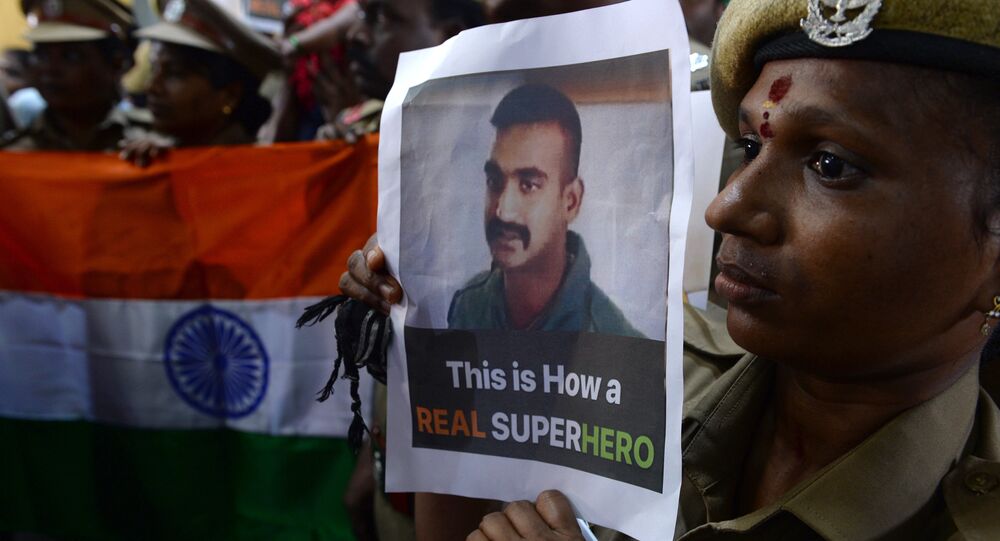 IAF pilot Abhinandan, who rocketed to fame after he allegedly shot down a Pakistani F-16 from atop his MiG-21 Bison, has received a new posting. During the dogfight, Abhinandan’s MiG-21 was shot down and crashed in Pakistan. He was captured but released after a brief detention. Pakistan has denied the allegations that an F-16 was shot down.

New Delhi (Sputnik): Wing Commander Abhinandan Varthaman has received a posting to the Suratgarh Air Force base in the western Indian state of Rajasthan bordering Pakistan, reported the Times of India. Varthaman assumed duties at his new base on Saturday, which is his first posting since his MiG-21 Bison fighter was shot down by Pakistani defences and he had to eject on Pakistani territory during an Indo-Pak aerial dogfight on 27 February.

"All defence postings are confidential and the only detail that we can confirm is that Wing Commander Abhinandan has been posted in Rajasthan. Further details cannot be divulged", reported the Times of India citing an official.

The actual posting for Wing Commander Abhinandan has been confirmed as Suratgarh by the media through its own sources.

"Suratgarh Air Force Base has MiG-21 Bison aircraft and at this point it is not clear if Abhinandan will get back to flying since as per the protocol, once a pilot ejects, he is grounded. Having said that, the Wing Commander's case might be looked at differently", said the report citing an unnamed official.

© AFP 2020 / STR
Indians Blast NYT for "Biased" Reporting on Aerial Dogfight Between MiG-21, F-16
The Wing Commander was in the heat of the dogfight that took place on 27 February when Pakistani airplanes reportedly crossed into Indian airspace. He allegedly shot down his rival's F-16 fighter before his own MiG-21 Bison was shot down and crashed into Pakistani territory. He was captured by Pakistani forces and later released after 60 hours of detention.

The 27 February dogfight was a buildup from the 14 February Pulwama terror attack allegedly carried out by Pakistan-based Jaish-e-Mohammad (JeM) in which more than 40 Indian soldiers were killed. India responded with airstrikes against alleged JeM terror camps on Pakistani soil on 26 February. Pakistan's Air Force responded with its own airstrike during which the dogfight involving Wing Commander Abhinandan took place.