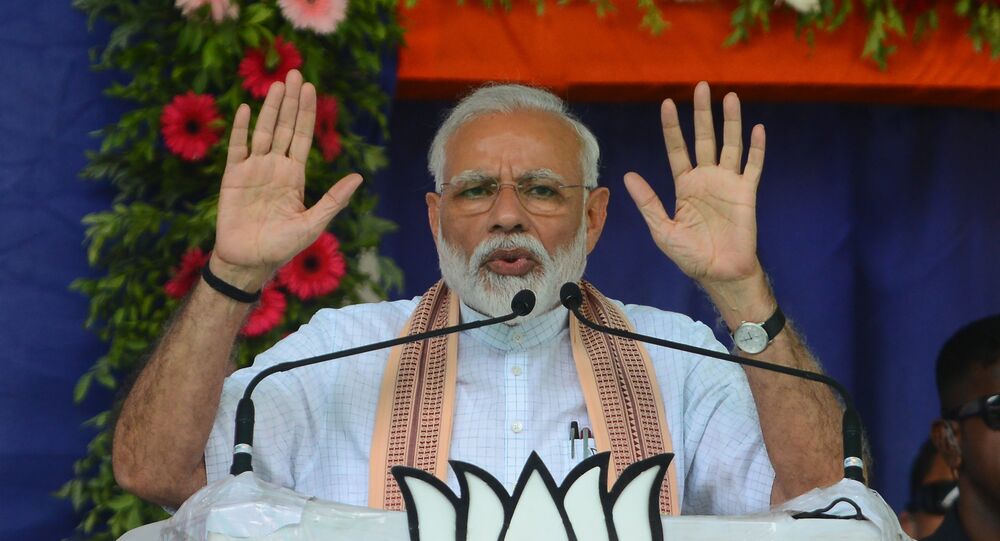 Time magazine’s international edition, which is due to be released on 20 May, features Indian Prime Minister Narendra Modi on the cover; the headline reads “India's Divider-in-Chief”.

Speaking to reporters on Saturday, a spokesperson for India’s ruling Bharatiya Janata Party (BJP) has lambasted Time magazine for its controversial cover, which he claimed is in sync with Pakistan's agenda and an attempt to tarnish Indian Prime Minister Narendra Modi’s image.

India’s Economic Times newspaper cited Sambit Patra as recalling that the author of the article about Modi was a Pakistani, which is why “nothing better can be expected from Pakistan”.

While berating Indian Congress president Rahul Gandhi for retweeting the article, Patra praised the “reforming, performing and transforming” agenda of the Modi government.

The BJP spokesman’s remarks come after Time magazine’s yet-to-be-released international edition featured the “India's Divider-in-Chief” headline on its cover, where Prime Minister Modi was also depicted; a secondary headline on the cover reads “Modi the Reformer”.

In his article, titled “Can the World's Largest Democracy Endure another Five Years of a Modi Government?”, Taseer specifically focused on the policies of the Indian Prime Minister and the BJP, in light of the ongoing parliamentary elections in the country.

© AFP 2021 / JUSTIN TALLIS
Confident of Win, PM Modi Plans Sweeping Reforms Before 2019 Poll Result - Report
This comes amid simmering tensions between New Delhi and Islamabad which escalated on 14 February, when at least 40 Indian security personnel were killed in a Pulwama terrorist attack.

After a Pakistan-based terrorist group claimed responsibility for the Pulwama attack, New Delhi accused Islamabad of harbouring and sponsoring the terrorist outfit, something that was flatly rejected by Pakistan.

The tensions culminated in the 27 February dogfight which saw the two countries losing one warplane each, one day after the Indian Air Force conducted air strikes against a suspected Jaish-e Mohammad training camp in Pakistan’s Balakot, reportedly eliminating a number of facilities and militants.