The cover story of Time magazine describing Indian Prime Minister Narendra Modi as "India's divider-in-chief" in its international edition appears to have infuriated his die-hard fans, more so as it has come during the country’s parliamentary elections.

New Delhi (Sputnik): Time magazine has featured Prime Minister Modi on the cover of its international edition with a controversial headline.

In its tweet promoting the latest issue, set to be released on 20 May, the magazine asks, "Can the world's largest democracy endure another five years of a Modi government?"

© Flickr / Simon HunterWilliams
Indian Police Ignore, Even Protect, Anti-Muslim ‘Cow Protection’ Lynch Mobs - Report
​In his piece, the article's author, Aatish Taseer, writes about PM Modi and his party's Hindutva politics in India which led to shifts in the electoral balance. The story is titled "Can the World's Largest Democracy Endure another Five Years of a Modi Government?"

The author is the son of late Pakistani politician and businessman Salmaan Taseer and Indian journalist Tavleen Singh.

Modi's Bharatiya Janata Party, a Hindu nationalist party, is often blamed by opposition parties for the rise in hate speech and violence against Muslims. Human Rights Watch has documented an increase in attacks on Muslims and lower-caste Hindus by so-called cow vigilantes since the BJP came to power. 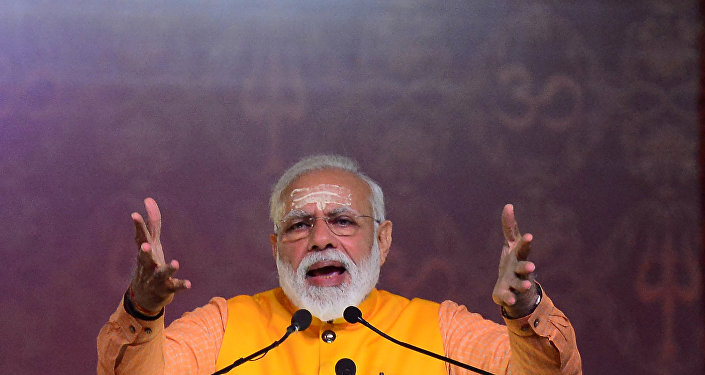 © AFP 2019 / SANJAY KANOJIA
Indian PM Continues to Dominate Popularity Chart Despite Dip in Ratings - Survey
Modi is seeking a second term in office as prime minister. His party is hoping to win the support of voters by raising the issue of national security in the polls after India's airstrike in the Balakot area of Pakistan in retaliation to a terror attack on Indian security forces in Pulwama, Jammu and Kashmir on 14 February, which killed over 40 soldiers. Opposition parties have criticised Modi and the BJP for politicising the issue of national security for electoral gain.

​However, others were very disappointed by the Time magazine story.

Having started on 11 April, the seven-phased parliamentary election will last until 19 May. With five phases already completed, the remaining two phases of the election will be held respectively on 12 May and 19 May. The votes will be counted on 23 May 2019.