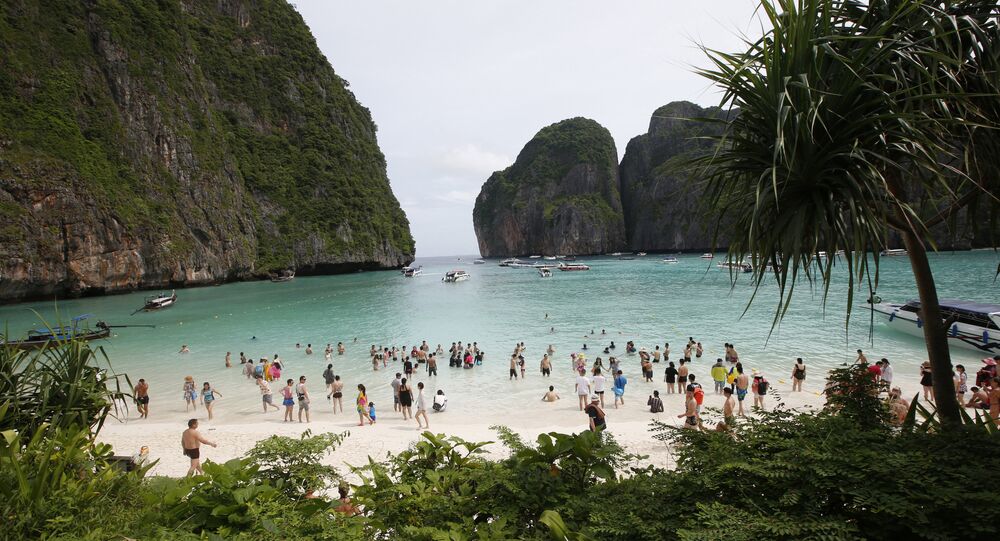 Thailand’s gorgeous Maya Bay will remain closed to tourists for another two years, the country’s Department of National Parks, Wildlife and Plant Conservation (DNP) decided on Wednesday, after its initial year-long closure resulted in ecological recovery.

The bay, on the uninhabited Koh Phi Phi Leh island of the Phi Phi island group, has long been on southern Thailand's tourist track, but it shot to fame after it was showcased in the 2000 Leonardo DiCaprio movie "The Beach." The number of visitors to the bay, a part of Thailand's Hat Noppharat Thara-Mu Ko Phi Phi National Park, skyrocketed to up to 5,000 per day, according to the Bangkok Post.

Websites like Hotels.com still warn visitors about the crowds at the small bay, saying, "On any given day at any time there will be 30+ speedboats and longtail boats on the beach, with large ferry boats carrying hundreds of snorkelers and sightseers moored in deeper water. Beautiful it is, secluded it isn't — thousands of people visit each day. Try to visit early in the morning or after 17:00 and you'll avoid the crowds."

The 250-by-150-meter bay was overwhelmed by the hordes, the Thai government decided, and closed it to visitors in June 2018. The closure will be extended now to allow the reefs in the bay to continue to recover, and also to give the department time to develop infrastructure there, like toilets, walkways, an online ticketing system, a vessel monitoring system and a residence for park officials, according to Kasetsart University Assistant Professor Thon Thamrongnawasawat, a member of the DNP's marine park management advisory board.

Last year, when the bay was closed, Thamrongnawasawat described it as "like someone who has been working for decades and has never stopped" in an AP story that noted that many Thai marine parks in the area close during the rainy season from May to October, but that Maya Bay had remained open for the surge of tourists who wanted to see the famous site. "Overworked and tired, all the beauty of the beach is gone. We need a timeout for the beach."

The DNP director general will have the final say on when the bay reopens, according to the National, and reports will be compiled every three months to assess how the natural wonder is holding up. When visitors are allowed in again, their numbers will be capped at 2,400, Thamrongnawasawat told the Bangkok Post. The seasonal reporting system will be used to determine a final, sustainable number of visitors to the iconic bay.