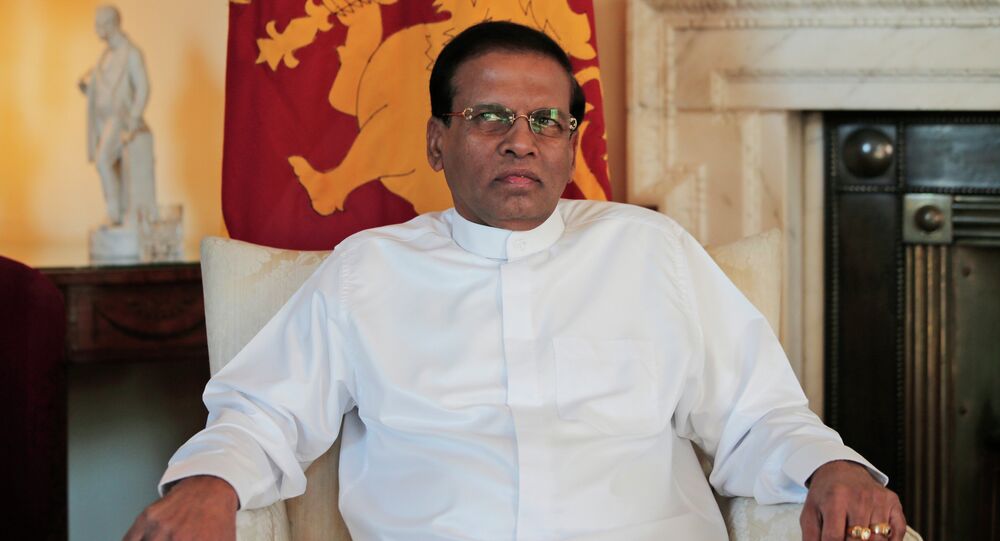 Sri Lankan President Maithripala Sirisena, who has vowed to restructure the security system of the terror-hit country, has said that 13 safe-houses and 41 bank accounts owned by terrorists responsible for the 21 April serial blasts have been identified.

New Delhi (Sputnik): Out of the 56 suspects held for the 21 April Sri Lankan bombings, at least 12 are hard-core terrorists, Sri Lankan President Mathripala Sirisena has said, adding that the situation in his island nation remains serious.

"Of the 56 suspects who currently remain in custody over their direct involvement, 12 are hardcore terrorists. 13 safe houses used by them have been discovered… This is, in my view, a serious situation", President Maithripala Sirisena said while addressing lawmakers in parliament on Tuesday.

Security forces have successfully contained the threat posed by the terrorist network and 56 suspects including 12 from terrorist groups linked to #EasterSunday attacks are in custody: Sri Lanka President #MaithripalaSirisena pic.twitter.com/AOgbaLJ8gf

​Authorities will soon confiscate the accounts, houses, and properties belonging to them, he added.

© REUTERS / Dinuka Liyanawatte
Some 25-30 Suspects Linked to Sri Lanka Bombings Still at Large - President
He  also said that 99% of people involved in the blasts have been arrested.

Earlier in the day, Sri Lanka Army chief Mahesh Senanayake gave a clarion call to the general public to return to their normal lives, assuring them that the tri-forces and the police were dedicated to their safety throughout day and night.

"After the terror attacks that occurred on April 21 and as of now, the Sri Lanka Army, other security forces and the police have implemented strategic plans to ensure the security", Senanayake said, while addressing media at the Ministry of Defence.

Meanwhile, searches across the country were underway to find suspects. Police have discovered a cache of anti-aircraft bullets in the Alagalla area in Vavuniya on Monday evening, while six casings used for mortar shells were also recovered from a nearby area.

In the last three days till Monday, the police also discovered two large militant training camps said to be linked to the deadly 21 April Easter Sunday terror attacks against churches and hotels that claimed 253 lives and injured over 500 others.