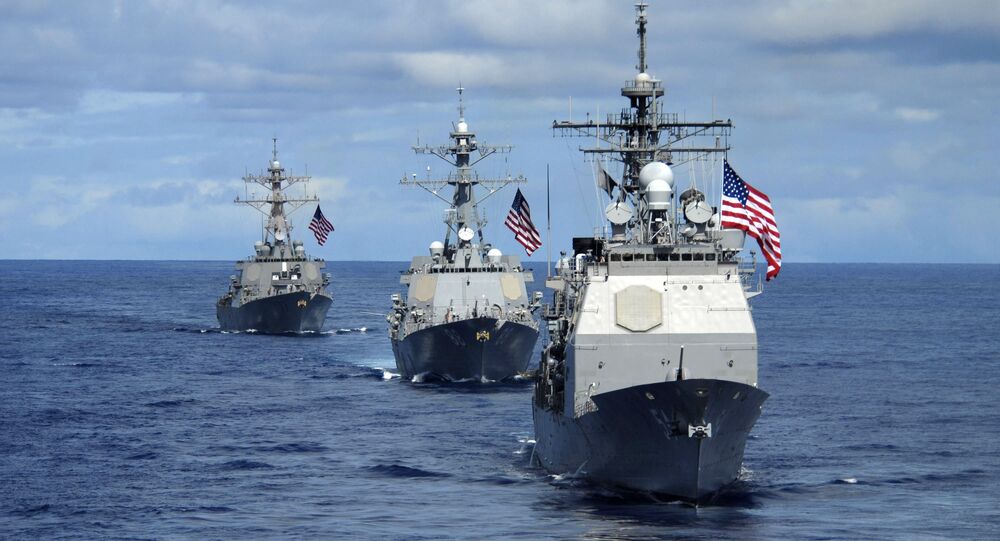 The South China Sea is one of a growing number of contentious issues in US-China relations, which have also been complicated by seemingly crumbling trade talks, US sanctions, and Taiwan's status.

Beijing expresses its "resolute opposition" to the passage of two US guided-missile destroyers Preble and Chung Hoon near Gaven and Johnson Reefs in the Spratly Islands, claimed by China in the South China Sea, Foreign Ministry Spokesman Geng Shuang told a press briefing on Monday.

"The Chinese side expresses strong dissatisfaction and resolute opposition", he said.

China's navy has as well called on US ships to leave the area and warned Washington to stop such provocative acts.

© AP Photo / Kin Cheung
China to Display New and Upgraded Naval Vessels Amid S China Sea Tensions
Reuters earlier cited Commander Clay Doss, a spokesman for the US Navy's Seventh Fleet, as saying that the "innocent passage" within 12 nautical miles of the island was made "to challenge excessive maritime claims and preserve access to the waterways as governed by international law".

The development comes amid reports by the South China Morning Post that Chinese Vice Premier Liu He will proceed with his trip to the United States this week for trade talks but is expected to shorten his Washington visit. Liu is reportedly set to leave Beijing on Thursday — three days later than scheduled — and leave DC a day later.

The news followed media speculation that he might call off this week's trade talks in light of comments by President Donald Trump that he would increase tariffs on $200 billion worth of Chinese goods from 10 percent to 25 percent starting Friday, as well as slap other Chinese products worth $325 billion with 25 percent tariffs.

The issue of the US military presence in the South China Sea region has long been one of the major flashpoints in US-China relations, along with the ongoing trade dispute, which has seen the two countries exchange several rounds of steep tariffs.

© AP Photo / Pablo Martinez Monsivais
US on Friday to Bump Tariffs 25% on $200bn Worth of Chinese Goods - Trump
China, which is currently in control of the vast majority of islands, reefs and shoals in the area that are also claimed by the Philippines, Vietnam, Malaysia and Taiwan, has repeatedly accused the US of provocations in the South China Sea and warned the US against sending vessels and military aircraft close to the islands and reefs claimed by Beijing.

It has repeatedly demandsed that the United States "stop actions that undermine China's sovereignty and security interests", while Washington has claimed that it is conducting freedom of navigation operations.

American officials have expressed dismay at China's construction of industrial outposts and military facilities on artificial islands in the South China Sea, while Beijing has consistently stressed that it has the sovereign right to send troops to any part of its territory.