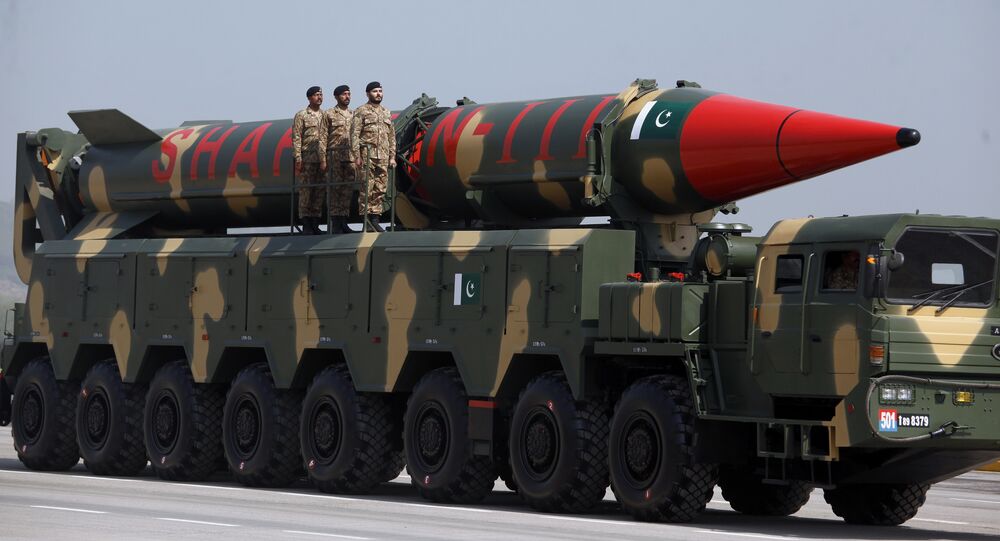 Earlier this week, the Pakistani Army blasted Indian Prime Minister Narendra Modi over his remarks about New Delhi's willingness to use its "mother of nuclear bombs" to retaliate in case of a nuclear war between the two South Asian powers.

A nuclear exchange between Pakistan and India would quickly turn into a "nuclear Armageddon" affecting the whole world, Sardar Masood Khan, president of the Pakistani-administered jurisdiction of Azad Jammu and Kashmir, has warned.

"If there was a nuclear conflict between the two countries, 20 million people would die immediately," Khan said, speaking at a conference organised by the Centre for Islam and Global Affairs in Istanbul, Turkey, with his remarks cited by the Anadolu Agency.

© CC0
Pakistan Warns India of Much 'Stronger Response' in Case of Fresh Conflict
According to Khan, the long-running Pakistani-Indian conflict over Kashmir, which came into being immediately after the two countries gained independence from Britain in 1947, "should be resolved and peace should be established. We have no other options," he stressed.

Among the three wars India and Pakistan have fought, between 1948 and 1971, two of them were over the Kashmir region, with low-intensity conflict raging inside the divided Kashmir region for decades, claiming thousands of lives and occasionally spilling out into broader tensions.

"The conflict in Kashmir is not only related to politics, economy and geopolitics, but it is also a human tragedy," Khan noted, adding that India and Pakistan might turn to the United Nations and neighbouring powers in a search for ways to resolve the problem.

Earlier this week, a Pakistani Armed Forces spokesman urged New Delhi not to "test" Pakistan's "resolve," saying that nuclear weapons were "a weapon of deterrence that should not be mentioned lightly."

© AP Photo / Saurabh Das
‘Unfortunate And Regrettable’: Pakistan Says Nuclear Threat by India’s Modi Disregards Strategic Stability
The comments were a response to Indian Prime Minister Narendra Modi, who told supporters at an election rally last month that India had the "mother of nuclear bombs" and would never yield to what he described as Pakistan's attempts at nuclear blackmail.

According to a recent estimate by the Stockholm International Peace Research Institute, Pakistan and India have a total of between 140-150 and 130-140 nuclear weapons, respectively. Both sides also have access to air-launched, land-based and sea-based nuclear delivery systems.

Tensions between the nuclear-armed neighbours escalated in mid-February, when al-Qaeda* affiliated terrorists believed to be operating from the Pakistani side of the border in Kashmir attacked an Indian security convoy in Pulwama, killing 40 personnel. India retaliated by launching airstrikes inside Pakistan in late February, with these resulting in a series of clashes along the Line of Control border area which have continued to this day.