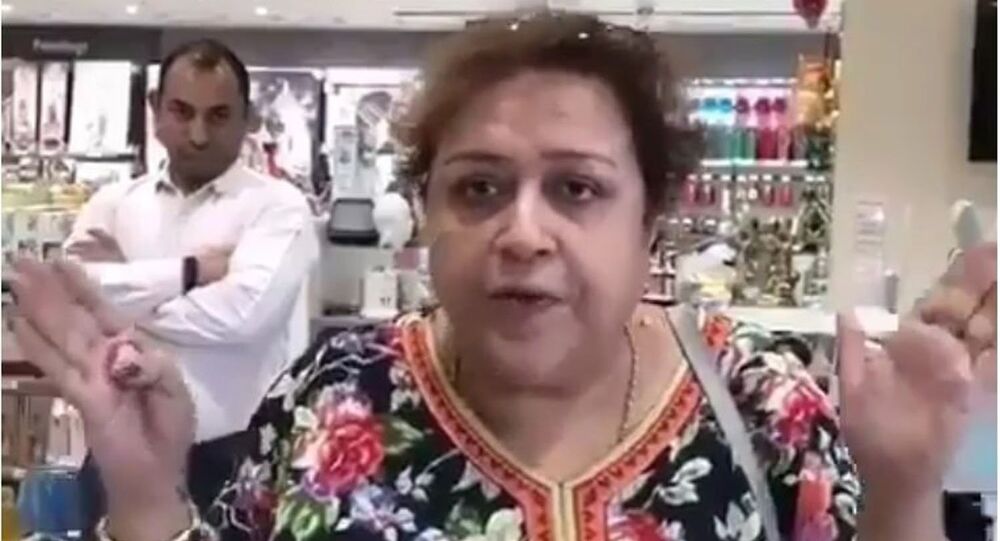 The video of the incident is breaking the internet. The woman, being addressed as ‘Aunty’ and ‘Auntyji’ in social posts, allegedly dress-shamed the girls and the girls took to social media campaigning against her with a hashtag ‘#auntyjiapologize’.

New Delhi (Sputnik): A video in which a middle-aged woman gets accosted after pointing out to some young girls in New Delhi that their dresses were too revealing for a public place has gone viral on social media.

The woman, who appears to be visiting a departmental store, went on to suggesting that by wearing such mini-dresses, the young girls were actually inviting men to rape them and that their parents should control them.

"Hello guys, this lady wants to wear short dresses to encourage all to see them. All the ladies wear (these) short dresses, or are naked to (get) rape(d)," the woman was seen saying in the video during the argument.

​The aggrieved girls confronted the woman and demanded an apology from her. It was to no avail as the adamant woman was unapologetic.

In the midst of the apology-seeking hustle, a mother of two came over and started giving a dress-down to the ‘Aunty' for her mean comments.

​The video of the entire episode has gone viral on major social media platforms. The video that was posted on Instagram by social handle @sunkissedshitzu was later pulled down by it. Now, it carries a message

The Instagram, however, still carries the post from @sunkissedshitzu that has the photo of the girls who were among the lot that ‘Auntyji' had allegedly dress-shamed. It has invited 84,017 likes in just 16 hours of being posted.

Meanwhile, social media users were set abuzz by the incident.

"Aunty you raped me with your thinking…." said this twitter user.

​This netizen was very hard on ‘Aunty' and said she deserved no place in the country.

​The Aunty was called ‘Douche bag lady' by this user.

​ "Filthy Aunty should apologise," was this twitter user's cry.

UK Woman Reveals How She Was Stripped, Stabbed by Roma During 'Shaming Ritual'

US Gymnast Sensation Speaks Out On Body Shaming, Sends Ripples Across Twitter