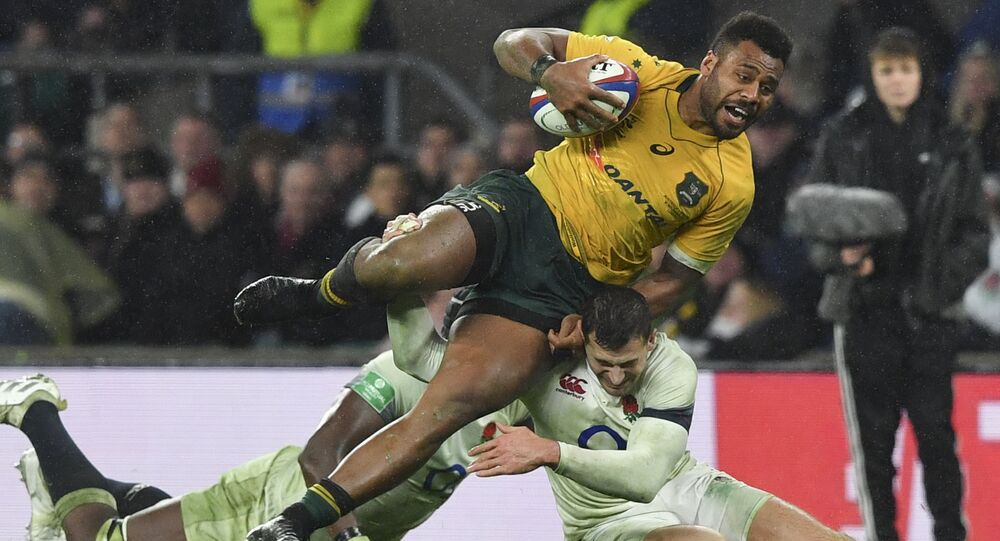 Rugby player Samu Kerevi came up with apologetic remarks after his Bible citations in the run-up to the Christian Easter holiday stirred a discussion online, with multiple fans expressing hope that he thinks differently from his fellow Wallabies player Israel Folau, a harsh opponent of homosexuality.

Australian rugby star Samu Kerevi has issued an apology for “offending” fans after expressing his love for Jesus and quoting the Bible in an Instagram post on Easter.

Days after the original remarks, Kerevi posted a story on the social network assuming that he might have offended some of his fans and if so, asking them to accept his apology:

"I apologise to anyone that I have offended in giving praise to our God on a weekend that we take off to celebrate his Sacrifice for you and I", Kerevi wrote, adding that he “will always give praise to Him”.

Separately, he addressed the media, coming up with words of conciliation, just in case:

“To the media, it's all love brothers & sisters, God Bless and enjoy your weekend".

Kerevi’s apology, meanwhile, drew the ire of the Queensland Reds and Wallabies’ prop Taniela Tupou. Tupou, often referred to as the “Tongan Thor”, shared an article of the news to his Facebook page on Tuesday, together with a derogatory comment:

“Might as well sack me and all the other Pacific Islands rugby players around the world because we have the same Christian beliefs”.

The Tongan Thor asserted that he would never apologise for his faith and what or whom he believes in, stressing that “religion has nothing to do with rugby anyways”.

Multiple netizens also appear to have taken the apology to heart, whereas others were raging about “pathetic” human beings that shouldn’t be religious if they feel their beliefs might offend someone:

Firstly, I'm pissed off that there were fans that felt offended at how Samu Kerevi publicly showed his love for Jesus. AND IT WAS EASTER!!!

Secondly, I'm disappointed that he actually did apologise later…

But that's just my 2c on it

Aye, pretty shameful, Kerevi's expression of his faith hurt no one.

Seriously what’s happening to the world. Why does he have to apologise for “ I love jesus” comment and why should that offend his fans. I’m Muslim I love Jesus and if that offends anyone bad luck ❤️⛪️🕍🕌 I really don’t care

People are so pathetic now adays. Dont understand why he apologise for

One even suggested that the ultimate aim of the story is to silence Christians across the world, along with the removal of the word itself from the public domain:

The aim is to silence all Christians and even to remove the word 'Christian' from public discourse. 'Easter worshippers' — Obama and Clinton.

On Holy Thursday, on the threshold of the Easter weekend, Queensland Reds captain Kerevi took to the social network to post a picture of himself playing for the team, captioning it with a Bible verse: “For God so loved the world, that he gave his only begotten Son, that whosoever believeth in him should not perish, but have everlasting life”.

The 25-year-old sportsman then thanked Jesus for “dying on the cross for me” and said he loves him. Whereas Kerevi’s words were appreciated by most of his fans, some questioned his sentimentality and wondered if his love confession hinted at his support for Israel Folau's outspokenly negative stance on homosexuality.

"I know a lot of gay kids and adults in our sport would love to hear a rugby leader like you [to] say you love and respect them for who they are — are you willing to endorse that message?" wrote one fan, with another one butting in in a similar way:

However, Kerevi’s remarks hardly pointed at any support for Folau’s controversy-fuelling stance. He went as far as to respond to one commenter, who suggested that “God is a completely homosexual man”, by trying to reconcile the two, religious and non-religious, camps:

"I'm sorry you believe that but he is a loving God. God bless mate".

Kerebi’s apology and the debate around it arrived after Wallabies’ Folau, aged 30 and a devout Christian, lashed out at homosexuals, liars, fornicators, thieves, atheists and idolators, saying they will “go to hell” unless they repent, as “only Jesus saves”. The Australian fullback is now preparing to face a Rugby Australia Code of Conduct hearing after disregarding the governing body's termination breach notice for his social media activity.

No Money, No Hotel, No Visa: Tunis Drama for Zimbabwe Rugby Team