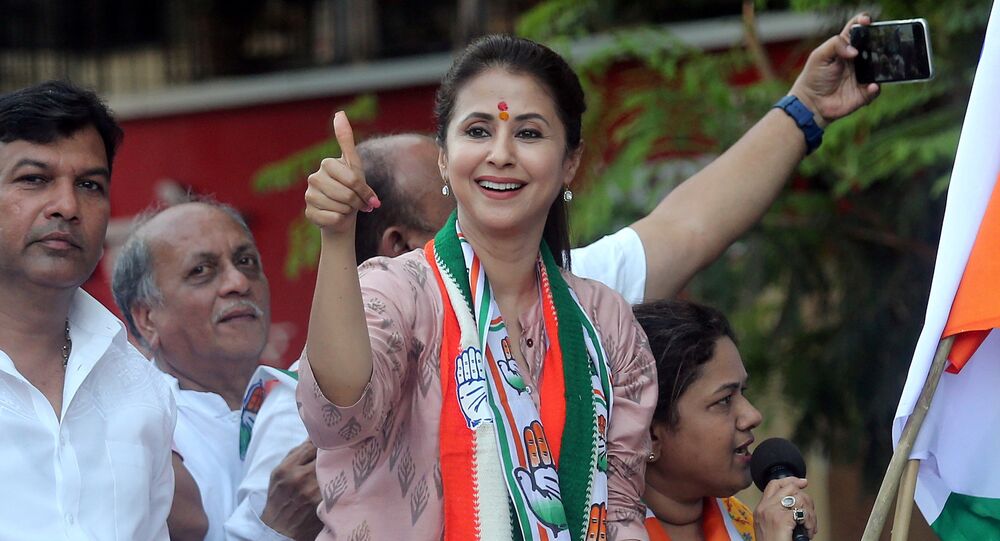 Many celebrities from the entertainment industry turned out to vote on Monday. Those who could not vote have urged others to come and cast their vote.

Former Miss World and global celebrity, Priyanka Chopra Jonas, posted a photo on social media with the "ink of honesty" on her fingernails saying, "This is the moment that matters….#LokSabhaElections2019."

This is the moment that matters….  Every vote is a voice that counts. #LokSabhaElections2019 pic.twitter.com/L0AHJLL4uY

Notable among Bollywood actresses was Urmila Matondkar who herself is contesting from the North Mumbai constituency on the Indian National Congress party ticket. She has urged all voters in her contingency to come out and vote.

Nothing feels better than making a contribution towards your country and carrying out your civic duty of Casting a Vote. Do your duty. 😊 pic.twitter.com/DPB7gW5gb8

© AP Photo / Thomas Cytrynowicz
Biopic on Female Politician to Get Indian Actress Highest Ever Pay - Reports
As polling went ahead she encouraged a woman with disabilities who had came out to cast her ballot in her area with the help of a walker.

The Spirit of Democracy is kept alive when everyone excercises their right to vote. Thank you to everyone who chose to do their duty and keep democracy intact. 🙏 pic.twitter.com/fFPJQNLCoM

​The famous Bachchans duo, Abhishek and Aishwarya Rai Bachchan, posted a tweet with inked fingernails confirming that they had cast their vote. They also urged their fans to "go vote".

​The senior Bachchans, superstar Amitabh Bachchan and his wife Jaya Bachchan, also posted their inked fingers on the social media.

There were many others including Shahrukh Khan who came out and voted to support their favourite candidates.

​India's 2019 Parliamentary Elections has seven phases, voting for which commenced on 11 April and will last until 19 May. With four phases already completed, the remaining three phases of the elections will be held respectively on 6 May, 12 May, and 19 May. Votes will be counted on 23 May 2019.