The New 1st outlet reported earlier in the day, citing a police spokesman, that Sri Lanka had arrested 20 suspects in connection with the coordinated bombings over the past 24 hours, adding that police had recovered the bodies of four suspected perpetrators of three bombings that rocked the city of Kalmunai on Friday.

Sri Lankan President Maithripala Sirisena has banned the groups National Thawheedh Jamaath (NTJ) and Jamathei Millathu Ibrahim (JMI) which are suspected of being behind the Easter Sunday blasts.

President Maithripala Sirisena, in terms of powers vested in him as the under Emergency Regulations No. 01 of 2019, has taken steps to ban the organizations National Thawheed Jammath (NTJ) and Jamathei Millathu Ibraheem (JMI) in Sri Lanka.

​The president said in a statement that all movable and immovable assets belonging to the groups would also be seized.

Steps are also being taken to ban several other extremist organisations in line with emergency regulations, according to the president.

According to reports citing security officials, the NTJ is suspected of being the main group that carried out the attacks. 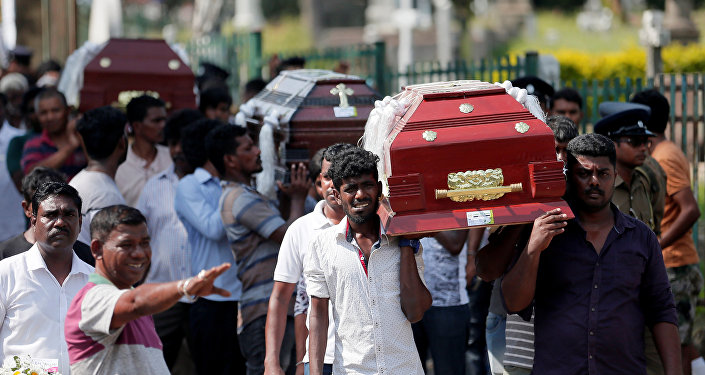 © REUTERS / Dinuka Liyanawatte
Open Doors UK Spokesperson: Sri Lanka Bombings ‘Clearly an Attack on Christians’
The three new explosions occurred in the wake of a series of coordinated blasts throughout Sri Lanka on Easter Sunday that left more than 250 people dead and more than 500 others injured.

Sri Lanka launched a criminal investigation immediately after the attacks and has reportedly already arrested over 100 suspects. According to prosecutors, nine suicide bombers carried out the terror attacks, eight of which have already been identified.