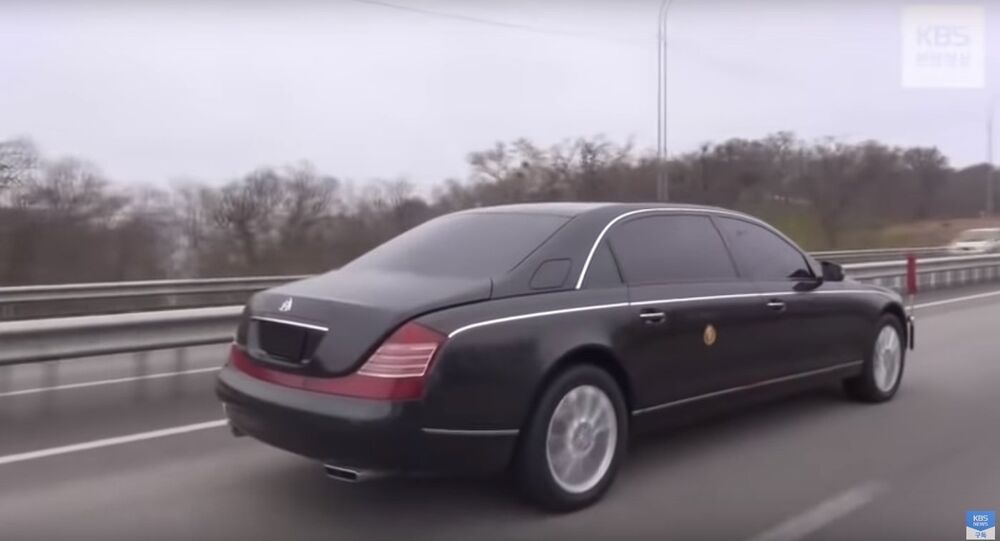 What Sanctions? German Carmaker 'Has No Idea' How Kim Jong-un Got its Limos

North Korean leader Kim Jong-un arrived in Russia’s Vladivostok by train on Wednesday to meet with Russian President Vladimir Putin and had two Mercedes limos waiting for him there.

German car manufacturer Daimler, which made the armoured limousines used by North Korean leader Kim Jong-un during his Vladivostok summit with Russian President Vladimir Putin, says it has no dealings with Pyongyang and has no idea how he got hold of their high-end vehicles.

“We have absolutely no idea how those vehicles were delivered to North Korea. For Daimler, the correct export of products in conformance with the law is a fundamental principle of responsible entrepreneurial activity”, the company’s spokeswoman Silke Mockert said in a statement to AP.

Under UN sanctions, the sale of luxury goods to North Korea is prohibited, but still Kim has repeatedly used the limos made by the Stuttgart-based company at various summits, including with US President Donald Trump in Singapore and Hanoi.

“Our company has had no business connections with North Korea for far more than 15 years now and strictly complies with EU and US embargoes. To prevent deliveries to North Korea and to any of its embassies worldwide, Daimler has implemented a comprehensive export control process”, she added.

At the same time, Daimler acknowledged that it had no control or responsibility over the actions of third parties.

© Sputnik / Vitaly Ankov
From Traffic Jams to Poetry: Russians Hit Social Media Timed To Kim’s Visit
The vehicle used by the North Korean leader is said to be equipped with essential communications and entertainment systems so that its passengers can remain “fully in touch with the rest of the world while enjoying the luxury and comfort of their own very special place in it”.

Photos of Kim Jong-un’s Mercedes limousines first emerged in 2014, while sanctions on the sale of luxury goods were introduced in 2006 following Pyongyang’s first nuclear test. The German-made vehicles are estimated to have been worth over $1 million each at the time of acquisition.

While it’s unclear how many Mercedes the North Korean fleet is boasting, back in 2015, a panel of experts looking into sanctions violations for the UN Security Council reported that Pyongyang had two modified versions of S-Class Mercedes-Benz limos, which had been armoured by an unnamed North American company before making their way to North Korea. The report also determined that two other limos were not Pullman versions, but had been modified by a third party.

READ MORE: Kim: US Acted in 'Bad Faith' in Hanoi

The following year, the panel of experts concluded that the customisation of at least two of the vehicles had allegedly been done in the United States before the cars arrived in China and were then transferred to North Korea.