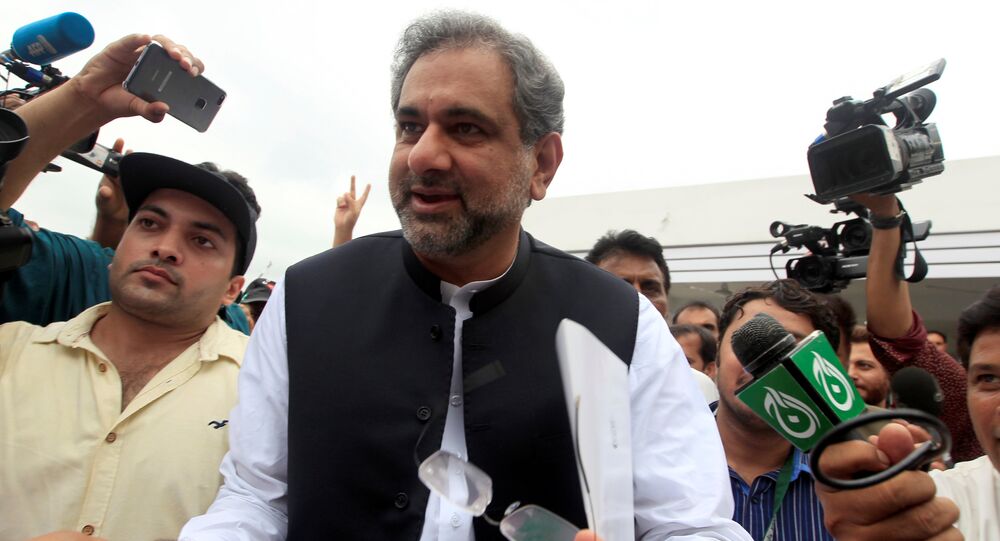 The Government of Pakistan on Friday prohibited former Prime Minister Shahid Khaqan Abbasi and Finance Minister Miftah Ismail from leaving the country with regard to a contract related to Liquefied Natural Gas (LNG) with Qatar.

New Delhi (Sputnik): The Interior Ministry of Pakistan placed the names of former Prime Minister Shahid Khaqan Abbasi and Finance Minister Ismail on the Exit Control List, which means that they cannot leave the country until further order, according to a report by Geo TV. In addition to this, Abbasi and Ismail's names have been placed on the no-fly list on the recommendation of the National Accountability Bureau.

The decision was taken after the National Accountability Bureau (NAB) summoned Abbasi, who held the post of the prime minister in 2017-18, on Thursday in a case related to a 15-year contract for Liquefied Natural Gas (LNG) with Qatar during his tenure as the petroleum and natural gas minister in 2016.

© East News / AP Photo/Justin Tallis, Pool
Ousted Pakistani PM Sentenced to 7 Years in Prison by Accountability Court - Report
Media reports cited Abbasi claiming that LNG was bought from Qatar due to the energy crisis in Pakistan, and the rate at which it was purchased was lower than that being offered by other countries.

As per the contract signed in 2016, Qatar agreed to export up to 3.75 million tonnes of LNG a year to the South Asian country at a price equivalent to 13.39 percent of international benchmark crude oil price.

That 2016 deal supplied Pakistan's first LNG terminal. The case was closed by the National Accountability Bureau in 2016 under Nawaz but was reopened in 2018.

Abbasi, who is a Pakistan Muslim League-Nawaz (PML-N) leader, had appeared before the NAB probe team at the bureau's office in Rawalpindi on Thursday, refuting all allegations levelled against him while stating that all contracts had been signed in accordance with Pakistan's constitution and the international laws.