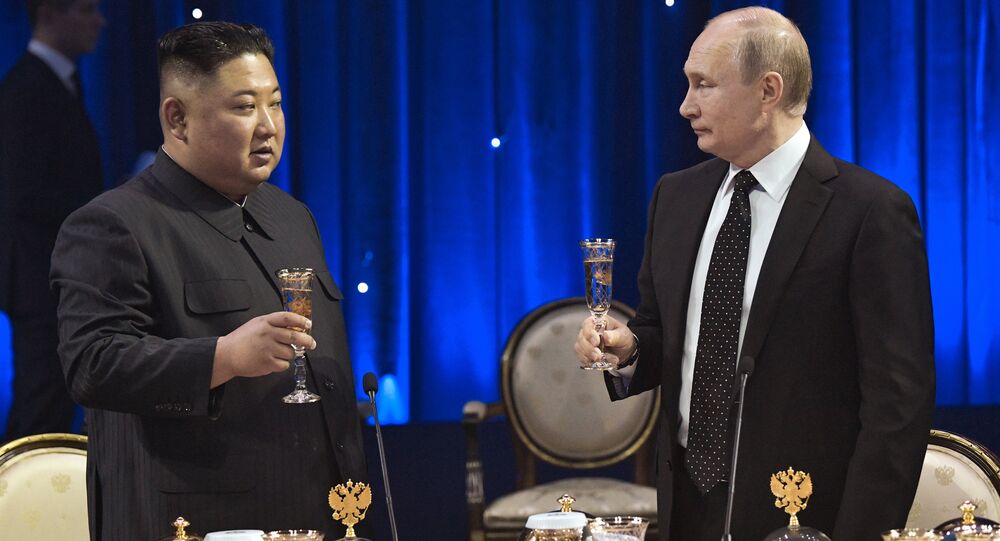 The summit between North Korean leader Kim Jong Un and Russian President Vladimir Putin, which was held on 25 April in Vladivostok, Russia, was "friendly" and has led to an agreement between the two leaders to strengthen their strategic partnership for preserving regional peace and security, the state-run Korean Central News Agency (KCNA) reports.

Kim has invited Putin to pay a return visit to DPRK after the summit in Vladivostok, AFP reports, citing KCNA.

Putin reportedly said that he was ready to visit the country.

According to the report, during the bilateral summit, Kim and Putin agreed to take actions to bring trade and economic relations between Russia and the DPRK to a new level.

Putin and Kim met on Thursday for the first time at the Far Eastern Federal University on Russky Island in Vladivostok. This was not only their first summit and Kim's first visit to Russia since he came to power in 2011, but also the North Korean leader's first overseas trip since his reelection as the chairman of the State Affairs Commission earlier in April.

© Sputnik / Aleksei Nikolsky
Press Conference After Meeting Between Vladimir Putin and Kim Jong-un (VIDEO)
After the Summit, Putin called Kim a "very open person", saying that they had detailed, open discussion of sanctions, the US and denuclearisation.

Putin stressed that it is important to reinstate the power of international law on the Korean Peninsula.

He added that Russia and the US share an interest in the denuclearisation of the peninsula.

"Chairman Kim Jong Un is a quite open person, he talks frankly about all the issues on the agenda — bilateral relations, sanctions, the United Nations, their [Pyongyang's] relations with the United States, of course, about the most important topic, the denuclearisation of the Korean Peninsula," Putin told reporters.

The Russian president said he had had a detailed discussion with Kim on various aspects of these issues.

"I can confirm that he is an interesting person to talk to, with a lot of meaningful things to say," Putin added.

© Sputnik / Vitaly Ankov
Kim: US Acted in 'Bad Faith' in Hanoi
Kim, in turn, thanked Putin Thursday for a substantive tete-a-tete dialogue on issues of mutual interest and expressed hope that the negotiations would continue in a similarly constructive way.

"Mr. President, we have just had a very substantive exchange of views tete-a-tete on the issues of mutual interests and pressing issues. I would like to thank you for time I spent with great pleasure. I hope that our negotiations will similarly continue in a useful and constructive way," Kim said.

The summit lasted for 3.5 hours, nearly two of which the leaders spent talking face to face.