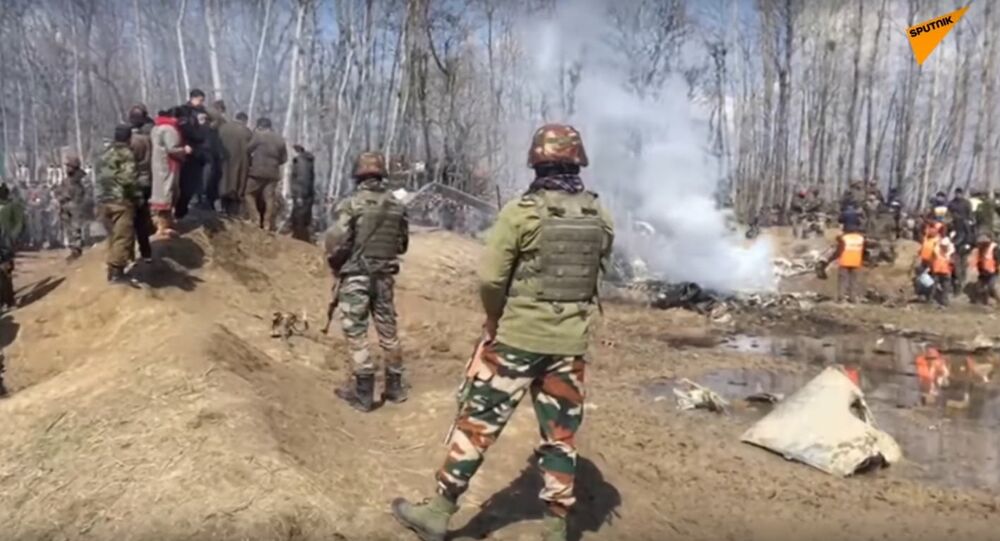 In the sustained counter-terrorism efforts India has launched after the 14 February Pulwama attack, when more than 40 Indian soldiers were killed by Jaish-e-Mohammed (JeM) jihadists, 41 terrorists have already been killed. Out of them, 25 belonged to JeM, claims the Indian Army.

New Delhi (Sputnik): Two terrorists affiliated with the jihadi group Hizb-ul-Mujahideen were killed in a gunfight with Indian security forces in the town of Bijbehara in south Kashmir early in the morning on Thursday in the northernmost Indian state of Jammu and Kashmir, reports news portal Risingkashmir.

As per local police officials, the two local terrorists have been identified as Safder Amin Bhat (age 25) and Burhan Ahmad Ganie (25). The two men had joined the terrorist outfit two years ago, added the report. A cordon and search operation was launched at Bagender Mohalla in the Bijbehara area after reports were received about the presence of terrorists in the area.

"The provocative firing by terrorists was retaliated (against) appropriately by security forces, triggering a gunfight in which two militants were killed. The bodies have been retrieved," a local police official said.

© REUTERS / Danish Ismail
Indian Armed Police Base Attacked in Kashmir With Grenade Launchers - Report
Earlier on Wednesday, the head of the Indian Army's Srinagar unit K. J. S. Dhillon said in a press briefing that 69 terrorists had been killed in anti-terrorist operations, while 12 have been arrested this year so far. He added that since the Pulwama attack, where more than 40 Indian servicemen were killed by Jaish-e-Mohammed (JeM) on 14 February, 41 terrorists have already been killed, including 25 that belonged to JeM.

​"Out of 25 killed JeM militants, 13 were foreigners. Basically we have targeted the JeM leadership. The situation now is, there is no one coming forward to take the leadership of JeM in the valley," Dhillon added.

Following the Pulwama attack, the Indian Air Force conducted a ‘non-military pre-emptive' aerial strike in Balakot inside Pakistan on 26 February to wipe out alleged terror infrastructure operated by JeM. Pakistan retaliated on the following day, with over two dozen fighter jets entering the Indian airspace. An aerial clash ensued between the two nuclear-armed nations for the first time in five decades. An Indian MiG-21 Bison reportedly shot down a Pakistani F-16 before it crashed inside Pakistan's territory; India also lost a plane. Pakistan has, however, denied that the F-16 plane was shot down.