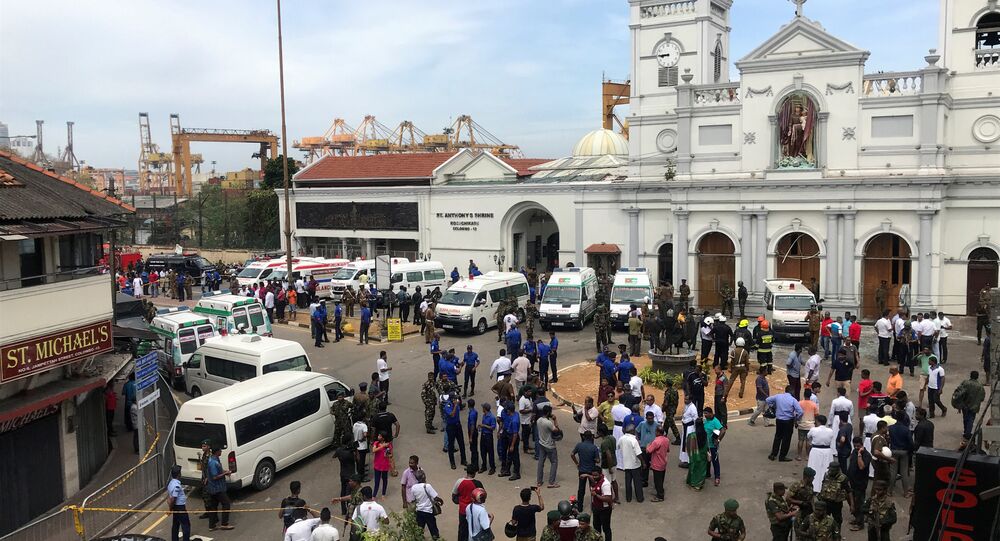 The bomber had studied in the UK before taking a course in Australia, Sri Lankan authorities said, with Prime Minister Ranil Wickremsinghe saying that Daesh* militants may be involved in the attacks.

An attacker suspected of participating in the Sri Lankan bombings on Easter Sunday was a student in the UK, according to the country's deputy defence minister.

The blasts have left 359 victims dead and wounded roughly 500 more. Daesh* has claimed it was behind the attacks but has failed to provide evidence of its involvement. >UK foreign minister Jeremy Hunt also sent his condolences to victims of Sunday's terrorist bombings. "People of all faiths and none stand together with Sri Lanka during their time of mourning", he tweeted on Wednesday.

Here at @SLHCinLondon to sign the book of condolence after Sunday’s horrific terrorist attacks. People of all faiths and none stand together with Sri Lanka🇱🇰 during their time of mourning pic.twitter.com/7PatFXfAJn

​What Do Authorities Know About the Attackers?

Sri Lankan police have released updates on the incident, stating that there were eight male attackers and one female — all whom were "well-educated" and "middle-class" natives.  There were also "ongoing terrorist plots" in Sri Lanka, the US envoy to Sri Lanka said as quoted by Reuters. Police have also detained roughly 60 people connected to the attacks.  Sri Lankan president Maithripala Sirisena also acknowledged security failures in the country's anti-terrorism capabilities.

"We will not allow the limited emergency regulations gazette last night to be used against the ordinary people and they will be used only against terror suspects," President Sirisena said in a Wednesday statement.

Mr. Sirisena also assured that new laws would not hinder freedom of expression, lawful protests and demonstrations, democratic rights, as well as individual and press freedoms.

"I take that responsibility for that," he said.

President Sirinsena also admitted to "lapses" in defence authorities, stating that although there were intelligence reports on the attacks, he had not been informed of them and that he would reshuffle high posts very soon, the statement read.

© CC0
FBI to Assist Sri Lanka in Blast Probe - US Embassy in Colombo
The Sri Lankan president also said that whilst there were intelligence reports on possible terrorist cells, he could not take legal action within normal laws without sufficient evidence, in addition to "reorganisations of the security sector with the assistance of foreign expertise".

Deputy defence minister Ruwan Wijewardene said in a Wednesday briefing that he believed that "one of the suicide bombers studied in the UK and then later on did his postgraduate in Australia before coming back to settle in Sri Lanka," and that most of the attackers were "well educated" and came from "middle or upper middle class" families.

He added: "They are financially quite independent and their families are quite stable financially."  Police sources also told AFP that two of the bombers were allegedly sons of a wealthy spice trader in Colombo, whom detonated explosives at the Shangri-La and Cinnamon Grand hotels.

Whilst the Sri Lankan government has blamed the attacks on the National Thowheed Jamath (NTJ), Mr. Wickremesinghe stated that they "could not have been done just locally".

"There had been training given and a coordination which we are not seeing earlier," he said.

Following the attacks, the FBI has said it would assist in investigations, according to the US embassy in Columbo as quoted by news outlet Colombopage. US involvement in the investigations came after the Sri Lankan government had requested the US for help. Interpol has also deployed an Incident Response Team (IRT) on Monday made of specialists in forensics, counterterrorism, disaster relief identification and others.