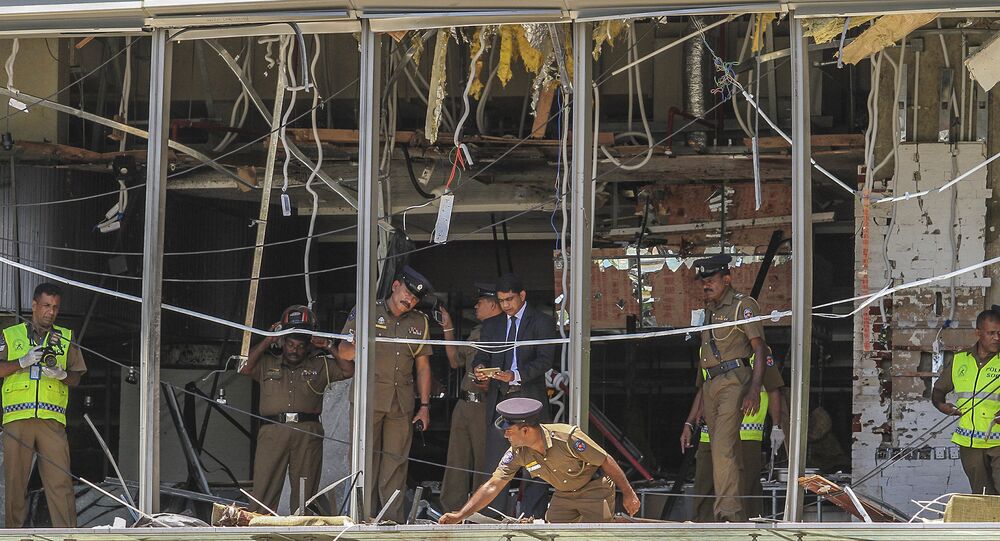 Eight explosions took place in the island nation on Easter Day, hitting several churches with Catholic worshipers and hotels in the country's capital Colombo and other cities.

According to Sri Lanka's Prime Minister Ranil Wickremesinghe, eight people have been arrested in connection with the blasts.

"So far the names that have come up are local", the prime minister stated, adding that investigators would look into whether the attackers had any "overseas links".

At the same time, the television channel News 1st reported, citing Wickremesinghe, that the government was aware of the possibility of an attack, but the necessary precautions were not taken.

© AFP 2020 / ISHARA S. KODIKARA
Deadly Explosions at Sri Lanka Churches, Hotels Send Ripples Across Social Media
Preliminary results of the investigation into one of the blasts showed that a day earlier, two people checked into a room at the Shangri-La hotel in Colombo, where one of the blasts took place, Sri Lankan news outlet Daily Mirror reported.

The suspects detonated bombs in a cafe and a corridor of the hotel, video surveillance footage has shown. According to investigators, C-4 explosives were used. Indian TV channel News 18 has revealed the names of the suspects. One of the alleged suicide bombers reportedly checked into the Cinnamon Grand hotel in Colombo under the name Mohamed Azzam Mohamed.

Two other suspected suicide bombers, who reportedly carried out the attacks on the Shangri La hotel and a church in Batticaloa, have reportedly been identified as Zahran Hashim and Abu Mohammed, according to News 18.

The suspects' nationality remains unknown and an investigation is underway.

Reacting to the explosions, authorities announced a temporary ban on social media services and messengers. The ban reportedly includes WhatsApp, Facebook, and Viber.

While the number of people killed in the series of deadly blasts that occurred on 21 April in Sri Lanka is 207 and the number of those injured 450, according to a police statement, media put the death toll higher, at 215.

© AP Photo / Eranga Jayawardena
WATCH Images of BLAST-RAVAGED Church's Interior in Sri Lanka
Media reported earlier in the day that Sri Lankan authorities had imposed a curfew across the country from 6:00 p.m. on Sunday to 6:00 a.m. on Monday local time (from 12:30 p.m. Sunday to 00:30 a.m. Monday GMT) following the attacks. Later, the curfew was reportedly prolonged until further notice.

In the morning of 21 April, a series of blasts rocked Sri Lanka, hitting several churches and hotels in the country's capital Colombo and other cities.