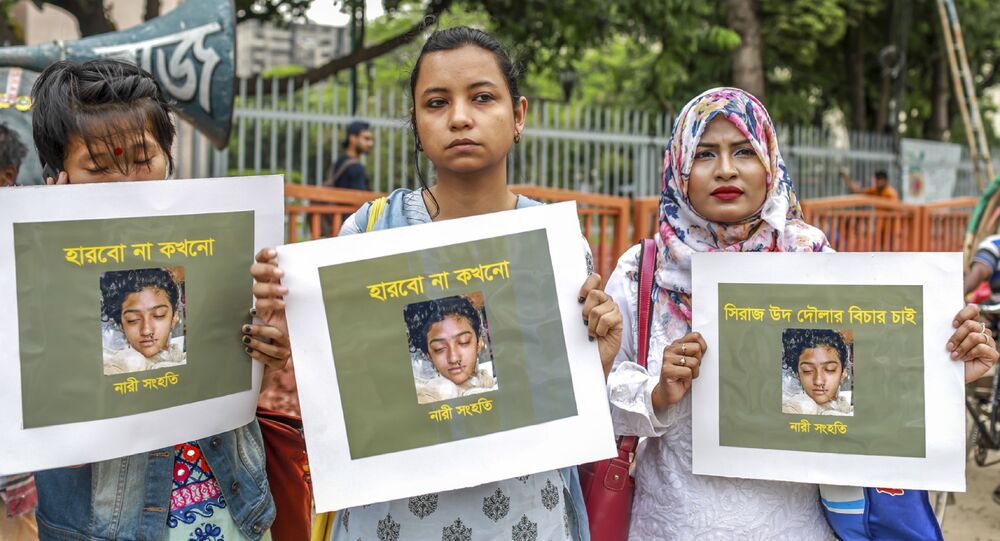 The murder of 19-year-old Nusrat Jahan Rafi, who was reportedly doused with kerosene and set on fire by a mob of girls and boys from her own Islamic school after she accused their headmaster of sexual harassment, has sparked protest in Bangladesh and evoked international criticism.

The footage reportedly showing the tearful conversation of 19-year-old Bangladeshi Nusrat Jahan Rafi, who died after allegedly being set on fire by her fellow students, with the police has recently emerged online. According to the Daily Mail, the video was filmed by officers after the young woman went to report her school headmaster’s touching her and making inappropriate advances last month.

According to the British outlet, police station chief Moazzem Hossain is heard dismissing her complaint as “not a big deal” on the video. While the girl is weeping hysterically, he allegedly encouraged her to stop, saying: “Stop crying, nothing happened that you have to cry”.

​Her complaint was dismissed. While the police neither questioned nor detained the man in question, the leak about her complaint prompted threats against the student and her family, eventually leading to the horrific outcome.

Earlier in April, a mob of male and female students reportedly doused the girl with kerosene on the roof of her school near the Bangladeshi capital of Dhaka. The young woman died on 10 April, after having suffered burns to 80 percent of her body.

The Bangladeshi police stated recently that she had been killed on the orders of her school principal, Siraj-ud-Daula, whom she had accused of harassment. Senior police superintendent Mohammad Iqbal told AFP that the head teacher "told them to put pressure on Rafi to withdraw the case or kill her if she refused”.

"The plan was to pass the incident off as a suicide. But it fell through after Rafi managed to come downstairs while on fire because the scarf burnt and freed her hands and feet", he said.

He also added that at least five of the seventeen arrested following the deadly incident had tied the girl up with a scarf before setting her on fire.

Following the tragic events, Prime Minister Sheikh Hasina met Nusrat's family in Dhaka and stressed that "none of the culprits will be spared from legal action".

While the headmaster was detained after the attack and remains in police custody now, police chief Hossain, who featured in the video, was dismissed and sent to another station.