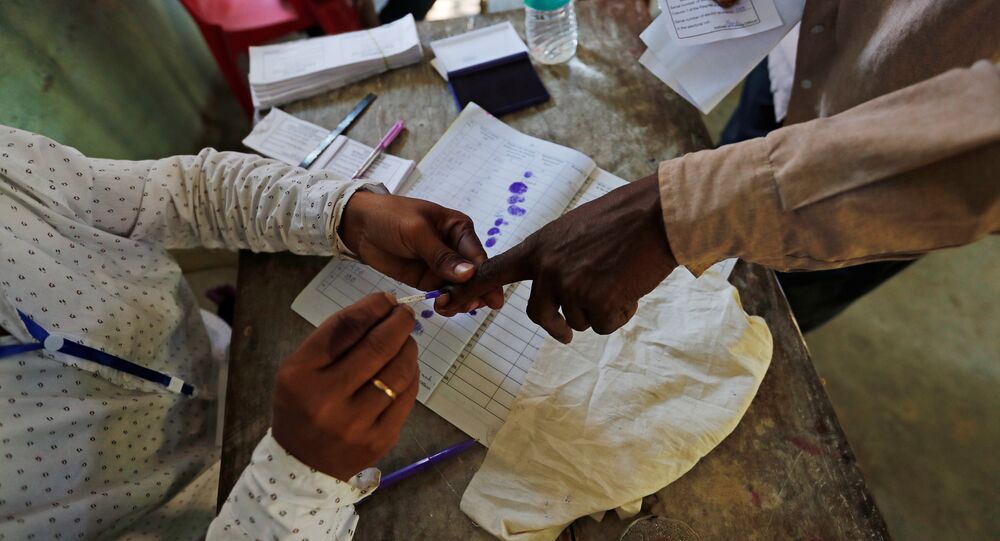 In the Indian election polling process, after a voter casts his/her vote, a mark of indelible ink is put on their index fingers, colloquially known as “ink of honesty”, which prevents a voter from casting duplicate votes. The voter might have realised that his mistake could not be undone.

New Delhi (Sputnik): An Indian man Pawan Kumar, frustrated with his mistake that he had cast his vote for the wrong party, chopped off his finger, reports the news portal Timesnownews. The incident happened at Bulandshahr polling station in the north Indian state of Uttar Pradesh.

A youth in Abdullapur Hulaspur village in UP's Bulandshahr severed his own finger for accidently voting BJP instead of BSP. pic.twitter.com/zXq9LwOOH3

© REUTERS / Rupak De Chowdhuri
Second Phase of India's 2019 Elections Marred With Violence in West Bengal
In a shocking video, Pawan Kumar is heard saying that he had chopped off his finger because he had voted for another candidate than intended. The voter was a supporter of the Bahujan Samaj Party (BSP), a party that has die-hard loyalists from the lower strata of the society. He was distraught that he had accidently pressed the wrong button on the electronic voting machine (EVM) and had voted for Bharatiya Janata Party (BJP). The "accidental" vote went to BJP's candidate Bhola Singh when it was "intended" for Yogesh Verma from the BSP.

#Watch: Shocker coming in from Bulandshahr, as a BSP supporter chopped off his finger after he allegedly pressed the wrong button on the EVM and voted for BJP instead. #LokSabhaElections2019 pic.twitter.com/1YqYIr2QWq

Kumar was rushed to a hospital, but was soon discharged after treatment.

The second phase of the seven-phase general election was held on Thursday in eleven Indian states and one union territory. The first phase of the Indian general elections began on 11 April and the last phase is scheduled to be completed by 19 May. With a population of 1.3 billion, India is the largest democracy in the world and has around 900 million citizens who are eligible to vote in the 2019 general election to elect a new government for the next five years. The election results will be announced on 23 May.