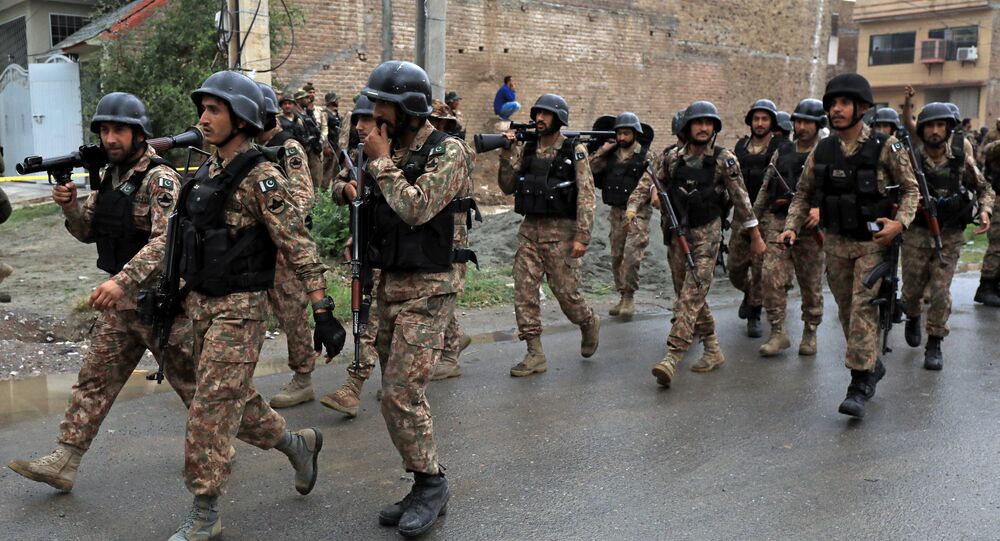 In a joint counter-terrorism operation launched by the Pakistan Army and police in the country’s Khyber Pakhtunkhwa Province, five suspected terrorists were eliminated after 17 hours of engagement.

New Delhi (Sputnik) — The Inter-Services Public Relations (ISPR), the media wing of the Pakistani Armed Forces, on Tuesday confirmed the death of five terrorists and an assistant police sub-inspector in a joint intelligence-based operation in Pakistan's northwestern Peshawar city.

"Army and KP police conducted a joint intelligence-based operation in Hayatabad Phase VII, Peshawar against a terrorist hideout. Operation started last night. During exchange of fire, five terrorists have been killed while ASI Qamar Alam embraced martyrdom, an officer and a soldier got injured," the ISPR reported.

© AP Photo / Mohammad Sajjad
Pakistan: Bomb Explodes at Open-Air Market, Killing at Least 16 (PHOTOS)
The eliminated terrorists were affiliated with the outlawed Tahrik-e-Taliban terrorist outfit. The terrorists took cover in a three-storey residential building, but they were ultimately neutralised after security forces demolished the building with the help of 50 kilograms of explosives.

The counter-terrorism operation began on Monday night amid an intermittent heavy exchange of fire between security forces and a cluster terrorists. Repeated attempts were made to clear the area.

After the building was demolished, security forces pulled out the bodies of the killed terrorists from the debris and transported them to the Khyber Medical Complex for postmortem and identification.

Lt. General Shaheen Mazhar Mehmood, commander of the Pakistan Army's XI Corps, inspected the area after the successful completion of the operation and praised the professional expertise of the security forces. He also lauded the residents of the area for their cooperation, added the ISPR.

Peshawar City Police Chief Qazi Jameel said one terrorist was killed on Monday night and the remaining four were eliminated on Tuesday.