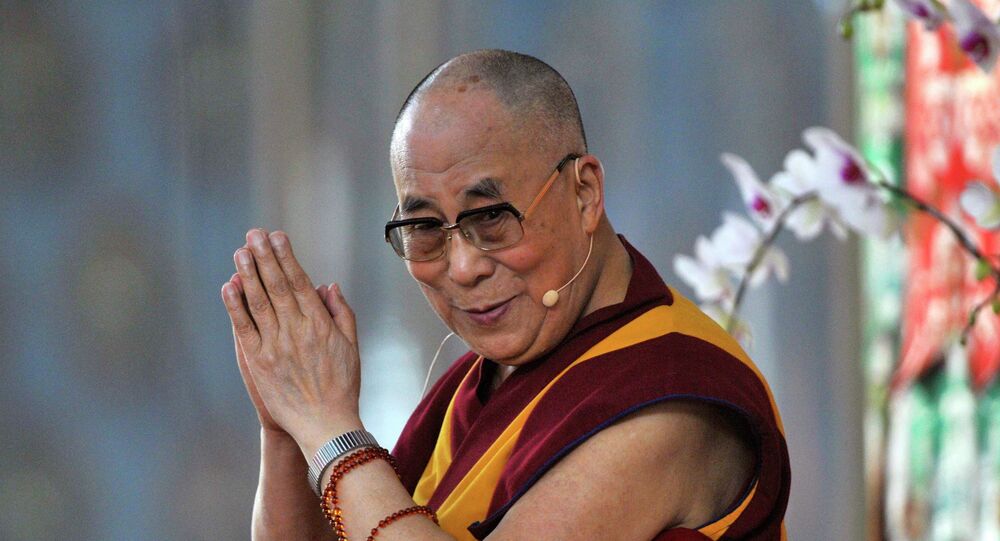 The spiritual leader of Tibetan Buddhism, the Dalai Lama, was reportedly discharged from a private hospital in India on Friday morning – three days after being admitted due to an alleged chest infection.

The reincarnation of the Dalai Lama “must comply with Chinese laws”, Chinese Foreign Ministry spokesman Lu Kang said when asked about the 83-year-old Buddhist monk’s physical condition following reports of his hospitalisation.

“In China’s history, clear rules have been established concerning the reincarnation of the living Buddha. The 14th Dalai Lama himself was found and recognised following religious rituals and historical conventions and his succession was approved by the then central government. Therefore reincarnation of living Buddhas, including the Dalai Lama, must comply with Chinese laws and regulations and follow religious rituals and historical conventions”, Lu told reporters.

© AFP 2021 / SAJJAD HUSSAIN
Dalai Lama Discharged from Indian Hospital After 3-Day Treatment - Report
The aforementioned laws include “New Regulations on Religious Affairs”, which came into force in February 2018, and “Rules on the Management of the Reincarnation of Tibetan Living Buddhas ”, enacted in 2007.

According to these regulations, Buddhist institutions should apply to the Chinese government if they intend to reincarnate a monk.

On Friday morning, the Nobel Peace Prize laureate was released from a New Delhi hospital after spending three days there, according to AFP. The Tibetan spiritual leader was reportedly diagnosed with a chest infection.

“His Holiness was feeling some discomfort this morning in Dharamsala. As a precaution, we came down to Delhi”, his private secretary Tenzin Taklha was quoted as saying by local media.

Back in 2011, the current Dalai Lama, who was identified as the reincarnation of his predecessor when he was two years old, said in a statement that it was inappropriate for the Chinese government to supervise his rebirth.

“They say they are waiting for my death and will recognise a 15th Dalai Lama of their choice. It is clear from their recent rules and regulations and subsequent declarations that they have a detailed strategy to deceive Tibetans”, he said.

The monk also reflected on what might happen after his death in an interview with Reuters last month:

“In future, in case you see two Dalai Lamas come, one from here, in a free country, one is chosen by Chinese, and then nobody will trust, nobody will respect [the one chosen by China]. So that’s an additional problem for the Chinese. It’s possible, it can happen”.