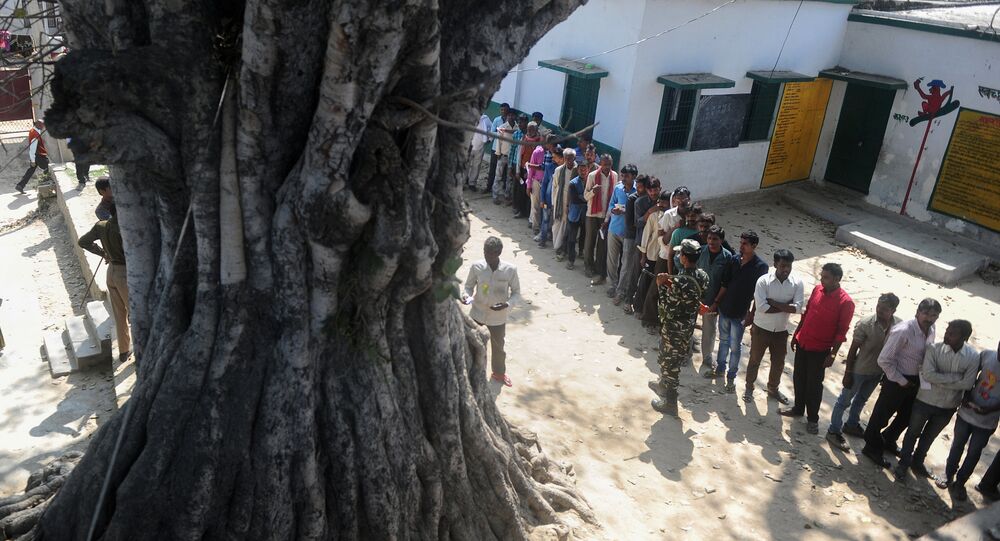 The biggest and arguably one of the longest election processes in the world began on Thursday in India, with the first of the seven-phase polling process underway. Electoral ballots in twenty Indian states will decide 91 out of a total of 543 parliamentary seats. In this phase, rural voters were seen being more active than city-based voters.

New Delhi (Sputnik): The voting for the first phase of the Indian national elections went underway on Thursday amid elaborate security arrangements made by the Election Commission of India, which is also ensuring adherence to strict guidelines to keep the voting process free, fair, and easy.

Voters from villages were seen being more active than those from the cities.

"Just now observers were here, they saw our polling station and we gave our feedback. The process started at 6:00 AM with the mock drill of voting machines At 7:00 am actual polling started. We were here till 5:00 PM to facilitate smooth voting", said K.K. Singh, the presiding officer of the polling booth at Chaproli which is a village of about 8,000, of which 2,500 were voters.

"I am happy that I am voting today in the election. I think we are one of the biggest and best democracies in the world in terms of transparency and liberty to elect leaders of our choice", said Suneet Kumar Rai, 48, living in Noida region near New Delhi. About 10,000 policemen are deployed in the Noida constituency as a security measure to prevent miscreants from playing spoil-sport in the polling process.

Despite some of the most elaborate security measures taken by the Election Commission of India and the high state of alert among law enforcement authorities, some isolated incidents of clashes and smashing of electronic voting machines have been reported. Two people were reportedly killed in clashes in the state of Andhra Pradesh. It is not yet clear whether these deaths were poll-related.

Prime Minister Narendra Modi, the heavyweight leader of the Bhartiya Janta Party (BJP), is aggressively campaigning to woo voters in his re-election bid. On the other hand, a coalition of opposition parties with the Indian National Congress at the forefront, are doing everything possible to improve their parliamentary seat tally as compared to the last national elections in 2014.

The voting for 543 Lok Sabha seats will be held in seven phases and the winners will be announced on 23 May, when the counting of votes takes place.