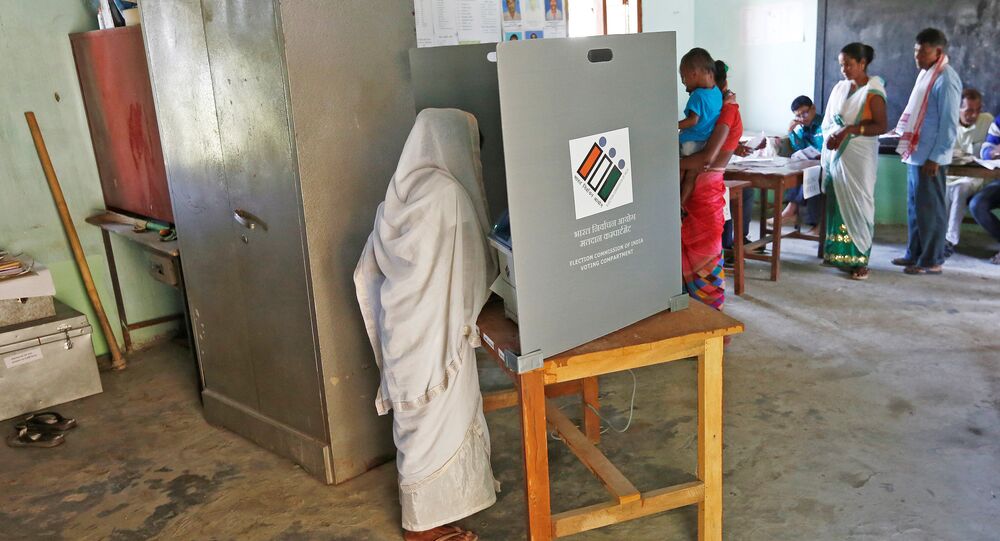 The curtains will finally drop on 23 May, when the election results are announced. The high stakes are 543 seats for India's lower house of parliament. Being the expensive "dance" that it is, it will cost the Indian exchequer some $7 billion - more than the $6.5 billion spent on the last US presidential elections.

New Delhi (Sputnik): The world's largest democratic exercise, the Indian elections, has many intriguing aspects that are amusing, as well as eye-opening. How and why are "inks for honesty" being used in the Indian elections? Why do elephant sculptures need to be covered before polls? How is the state election machinery coping with Maoist rebels and dangers to their lives posed by lions and crocodiles in remote locations? How is a lotus flower related to a human palm? This is the multi-coloured electoral process currently underway that is making multi-dimensional demands on India's statutory election body.

Our very own Pritam from @IsraelinIndia was the very first voter in his district, among the first districts to vote in the #IndiaElections2019 🗳
Congratulations Pritam and good luck #India on the beginning of elections today! pic.twitter.com/RnaqSFckRi

For the uninitiated, Sputnik is hereunder showcasing the captivating gigantic Indian election system, complete with facts and figures. What is at stake is that the incumbent prime minister is seeking re-election on a nationalistic platform, while the opposition is working hard to unseat him, making pro-poor largesse their election promise. Here is all that you would need to know about India, its democracy and the largest free voting system in the world.

#Bastar people came out to ensure Ballot defeats bullets of #Naxals in #Bastar
Despite Naxals warning to boycott elections pic.twitter.com/kbAUwAmsUS

India is the largest democracy in the world, with a population of 1.3 billion, out of which some 900 million citizens are eligible to vote. This figure from the 2019 elections is 10 percent more than the voter count in the 2014 polls. Of these, 432 million voters are women and some 16 million are first-time voters.

The entire electoral exercise will cost India $7 billion, which is much higher than the 2014 national elections. Per voter polling expenses for India works out to be $8.

This is the right and tight slap on Terrorists, separatists and others who boycott elections.
North Kashmir resident enjoying the festival of #India #VoteKar #LokSabhaElections2019 #VoteForIndia pic.twitter.com/5siPrssWMs

The country has seven national parties that have a pan-India presence. The main two parties that dominate the political arena are: the right-leaning Bharatiya Janata Party and the centre-left Indian National Congress.

There are 52 regional parties that have restricted areas of influence, mainly along linguistic, cultural, and ethnic group lines. The Indian election system allows for independent candidates without any affiliation to political parties to contest in elections.

In the coalition era, most national parties have some pre-poll alignment with regional parties to bolster victory chances and avoid division of votes.

For the first phase beginning Thursday, polling for 91 parliamentary seats will take place. There are 1,279 candidate contestants in this phase.

Each party (and every independent contesting candidate) has been allotted a unique party symbol. This is to facilitate illiterate people to cast their votes even if they are not able to read the names of their chosen candidates.

One national party has been allotted an "elephant" as its symbol. According to election rules, all elephant stone sculptures in public places constructed by the party have to be covered until elections are over.

The governing party, Bharatiya Janata Party, has the "blooming lotus flower" as its party symbol. The party icon is symbolic of its core political stance, namely adherence to Hindu traditions and culture.

Likewise, the principal opposition party, the Indian National Congress, has the "palm of a human hand" as its election symbol. The messaging through this symbol is that the party is a "helping hand" for one and all.

900m voters, 800,000 polling stations, 11m officials, £5bn+. India's elections are simply the biggest there has ever been via @safimichael https://t.co/ZAx0bAOONH pic.twitter.com/GQAdiqEOVt

India is the seventh largest country in the world in terms of land area, with quite a high population density. The country will have 1,035,000 polling stations. On average, each station is manned by some 5-8 polling staff apart from security officials.

The country has forested areas, marshlands, mountainous regions and places where local transportation is not available. To ensure that every voter is able to cast his/her vote, all polling stations are required to be within two kilometres of every citizen.

Indian elections are a logistical nightmare not just because of the size of India's democracy, but also because of the vast geography and people living in far-flung inaccessible places.

Voting is scheduled to take place in seven phases over six weeks.

More than 11 million government officials will be involved in the national elections. Some of them will be travelling by foot, boat, or riding atop animals — including elephants — to discharge their election duties.

Security personnel deployed on election duty sit atop a ferryboat as they arrive along with polling officers in Nimatighat in Assam’s Jorhat district, April 9. #IndiaElections2019 #LokSabhaElections2019 📸 pic.twitter.com/bISGYMY62U

Manning polling stations are especially dangerous in regions that have people who are hostile to the Indian electoral process. One such region is the Maoist-affected one in central-east India. Polling officials not only have to contend with Maoists, but also have to fend for themselves in case they are attacked by wild animals like lions or leopards, as these regions are among the densely forested regions of the country.

Listen to these women voters at a polling booth in #Dantewada #Chhattisgarh on why they came out to vote despite Maoist threats & the killing of popular tribal leader #BhimaMandavi by Naxals just two days ago. A MUST WATCH #IndiaElections2019 @timesofindia https://t.co/eQ2zOFgp0Y

​In the Andaman and Nicobar Islands, electoral officials have to wade through crocodile-infested swamps using locally available boats or rafts.

Voting will take place using electronic voting machines (EVMs) which are stand-alone, non-interconnected machines. Voting through EVMs is done by pressing a button by the candidate's name (or his/her party symbol).

There were apprehensions that EVMs are not fool-proof and are able to be tampered with. Political parties have even approached the courts for scrapping EVMs and reverting back to the paper ballot system of voting. After hearing out all parties, the courts ordered a collateral paper trail to accompany each casting of a vote for confirmation purposes. These are called VVPAT (Voter Verifiable Paper Audit Trail) EVMs.

There will be 5.7 million EVMs deployed for the Indian national elections. After voting has taken place, EVMs are locked up in heavily guarded "strong rooms" until the counting day. Representatives from political parties are not allowed to enter the strong rooms, but can be present in the vicinity if they wish to.

EVMs are reportedly malfunctioning in Andhra Pradesh where Lok Sabha and Assembly elections are being carried out simultaneously. Political leaders have urged EC to take action.

Each voter coming to the polling station to cast his vote would first need to get his identity verified by polling staff and security personnel. Votes are cast turn-by-turn on the one-voter-at-a-time basis. When a voter's turn comes, a small indelible ink mark is placed on their index fingernails to prevent bogus/duplicate voting — an ink-for-honesty implementation. The voter then goes alone to a secluded and covered booth and exercises his franchise on the polling machine (EVM).

The female voters standing in a queue to cast their votes, at a polling booth, during the 1st Phase of #GeneralElections2019, at Kohima, in Nagaland pic.twitter.com/b2uTDtrj4O

The Election Commission of India is a statutory body that has the mandate to conduct elections in India such that each contestant has a level playing field and that voting and subsequent vote counting is done in a fair and transparent manner. Voting, of course, is done through a secret ballot system.

When election dates are announced, the Election Commission enforces a Model Code of Conduct (MCC) which has to be strictly adhered to by all political parties and electoral contestants.

A winner of a parliamentary constituency is the candidate that gets the highest number of votes from that constituency. This is called a "first-past-the-post" system of electoral victory. There are no minimum percentage of votes required for a candidate to be declared a winner.

This is the biggest election in world history, in the biggest democracy in the world. Incumbent Prime Minister Narendra Modi is seeking a second term in office. He won a landslide victory in the previous election held in 2014. Modi's re-election platform is national security and a tough stance against terrorism.

The opposition parties have shown a resurgence since their poor showing in the 2014 elections. To counter Modi's persona, there has been a closing of ranks among them where many big and small national and regional parties have formed alliances so that all opposition votes are consolidated.

The first phase of the world's largest free and fair elections commenced on Thursday. In the seven-phase polling process, the final phase will take place on 19 May. The results will be announced on 23 May.