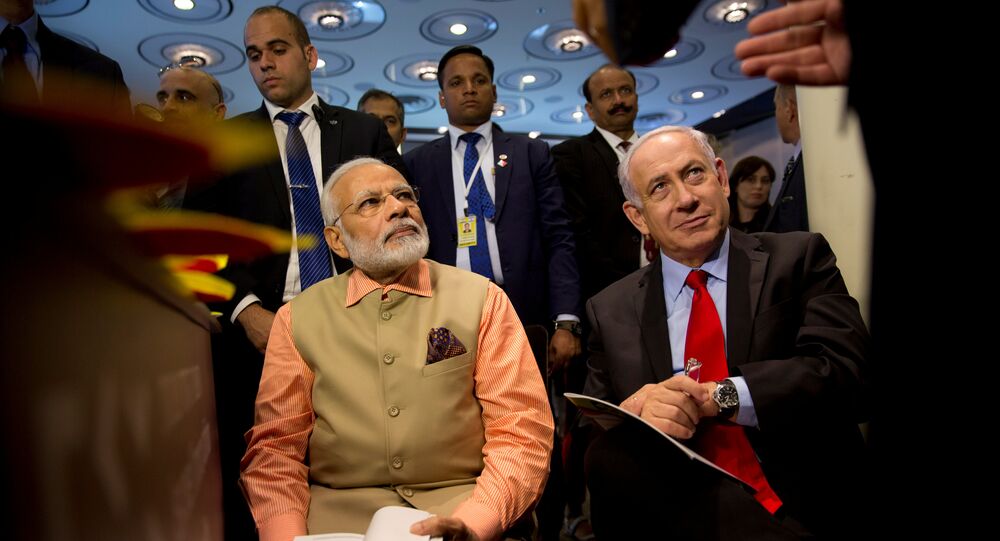 Imran Khan questioned whether the people of Israel and India feel outraged to see how far their respective leaders will go to win elections.

New Delhi (Sputnik): Pakistan Prime Minister Imran Khan on Tuesday launched a scathing attack on Indian Prime Minister Narendra Modi and Israeli Prime Minister Benjamin Netanyahu on the day when Israel is voting to elect its next government; India will begin the voting process for its general elections shortly.

"When leaders in Israel and India show a moral bankruptcy in their readiness to annex the occupied West Bank and India-Occupied Kashmir in defiance of international law, UN Security Council resolutions & their own Constitution for votes, don't their people feel a sense of outrage and wonder how far they will go simply to win an election?" Imran Khan tweeted on Tuesday.

When ldrs in Israel & India show a moral bankruptcy in their readiness to annex occupied West Bank & IOK in defiance of int law, UNSC resolutions & their own Constitution for votes, don't their ppl feel a sense of outrage & wonder how far they will go simply to win an election?

Israelis are voting on Tuesday, with Prime Minister Benjamin Netanyahu, leader of the right-wing Likud Party, seeking a fifth term in office.

© REUTERS / Adnan Abidi
India to Respond to Pakistan's Bullets 'With Bombs' - Modi Party Leader
Around 900 million will begin casting their votes starting on 11 April ina  seven-phase polling process in India that will end with the announcement of its results on 23 May. The ruling Bharatiya Janata Party (BJP) hopes to retain control of the 543-seat Lok Sabha (Indian Lower House of Parliament).

"Our duty is to protect our nation, while Congress (the country's main opposition party) and its supporters are anti-national. They are in favour of Article 370 (pertaining to unfair privileges to the strife-ridden state of Jammu and Kashmir). What Congress's sham document (manifesto) is stating is exactly what Pakistan is saying," PM Modi thundered at an election rally on Tuesday.

"Same language as that of Pakistan": PM Modi attacks Congress over its manifesto pic.twitter.com/pyw5c8AFUm

The BJP, in its 48-page manifesto, has made a new pledge to scrap Article 370 and Article 35A that gives special privileges to residents of India in the Kashmir region, such as laws preventing outsiders from buying property.

Earlier, Imran Khan took to Twitter to criticise the Indian government for fuelling war hysteria with Pakistan after the mid-February incident, when more than 40 Indian soldiers were killed in a terrorist attack in the Pulwama district of Kashmir.

Pakistan-based Jaish-e-Mohammed had claimed responsibility for the attack but the Indian government had squarely pegged blame on the Imran Khan government for allegedly sponsoring terror activities in India. In retaliation, the Indian Air Force had conducted an aerial strike on 26 February, describing it as a non-military strike against terrorist facilities in Balakot, inside Pakistan. The following day, the two nuclear-armed nations embroiled themselves in their first aerial clash in decades, which resulted in the loss of air assets.