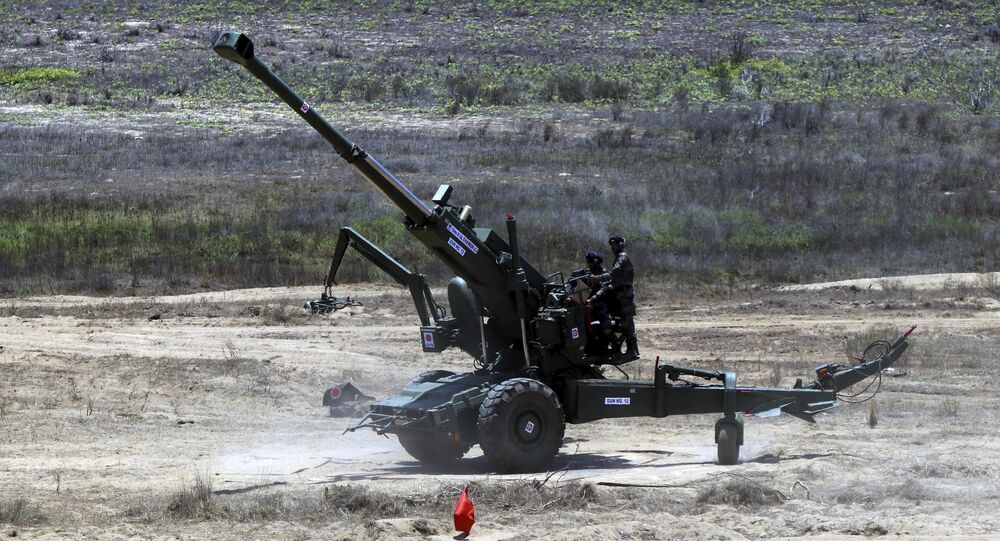 'Dhanush' artillery is equipped with an inertial navigation-based sighting system, auto-laying capabilities, on-board ballistic computation and an advanced day-and-night direct firing system. Launching own production has taken years due to several issues, including corruption charges plaguing the original deal, as well as changes in specifications.

New Delhi (Sputnik) — The Indian Army received its first batch of six Dhanush long-range artillery guns on Monday, as India and Pakistan continue to exchange fire at the Line of Control (LoC) in a conflict that has continued since mid-February. They are manufactured at the ordnance factory in Jabalpur in the central Indian state of Madhya Pradesh.

The Indian Army and Ordnance Factory Board (OFB) had teamed up to build the 13-tonne, 155-mm, 45 calibre howitzer. The unit is based on the FH-77B 155-mm/39-cal towed howitzer, manufactured by the Swedish defence contractor Bofors (now BAE Systems). India acquired 414 of these artillery uints between 1987 and 1991.

Cross-border artillery fire has continued since the 14 February suicide attack which took the lives of more than 40 Indian soldiers in Pulwama. Jaish-e-Mohammed terrorists claimed responsibility for the attack, and the Indian Air Force retaliated by destroying the group's alleged encampment in Balakot, Pakistan.

"The Bofors gun had played a crucial role during the Kargil war with Pakistan in 1999. The Indian Army deployed a mere 22 Bofors guns in 1999. Now imagine the added firepower that Dhanush howitzers can bring to bear on the adversary," a government official told Sputnik.

© Sputnik
India’s New Domestic Artillery Gun Fails Weapons Trials for Third Time
Earlier in February, the Indian defence ministry had cleared a Bulk Production Clearance (BPC) to produce 114 such artillery units after a series of extensive trials that began in November 2012. Some 12 gun prototypes have been tested in varying climatic conditions and on different types of terrain. The state-owned Ordnance Factory Board will deliver a total 18 howitzers to the army by December 2019; the rest of the order will be delivered before the end of 2022.

"The guns travelled extensively in towed and self-propelled mode in all terrains, namely desert and high altitude, with each gun clocking over 1,600 km. This extensive exercise was carried out by end-users for the first time for any gun system under the process of induction," The Indian defence ministry said in the details it provided on the units ahead of induction on Monday.

The guns took years to produce due to several constraints, including the political turmoil surrounding charges of corruption in the deal and changes in technical and operatting specifications. The parameters of the Indian version of the Bofors howitzer were altered from 155 mm x39-calibre to 155 mm x 45-calibre. The Ordnance Factory Board (OFB) received transfer of technology (ToT) documents pertaining to the 155 mm x 39-calibre weaponry at the outset, which was then converted to 155 mm x 45-calibre. The guns can accommodate both boll bags and a bi-modular charge system (BMCS), which have resulted in an increased range, from 30 kilometres to around 42 kilometres.

READ MORE: Indian Army to Get First Batch of K-9 Howitzers Next Week

In 2017, the gun failed twice during user trials, when a shell broke while moving through the howitzer's barrel on two separate occasions. However, an internal enquiry conducted by the OFB in co-operation with the Indian Army did not find any fault with the guns per se and attributed the failures to defective shells.

Over the last year, the Indian Army has already received much-needed artillery pieces that promise to give it teeth in the west of the country as well as on China's borders. The first batch of K9 Vajra and M777 guns, both featuring 155mm specifications, were inducted into the army last year. The Vajra is a tracked, self-propelled gun and the 4.5 tonne M777 is a light weight howitzer which can be carried underslung by a helicopter and sent to the formidable terrain of Himalayas. Both guns can fire up to a range of 30 km. There are 100 Vajra guns and 145 M777. The OFB has also been modernising 300 vintage 130mm guns to 155 mm/ 45 calibre; they are expected to be completed by 2022. The upgrade involves changing the barrel, adding new sighting and loading systems, enabling better accuracy and enhancing the rate of fire.