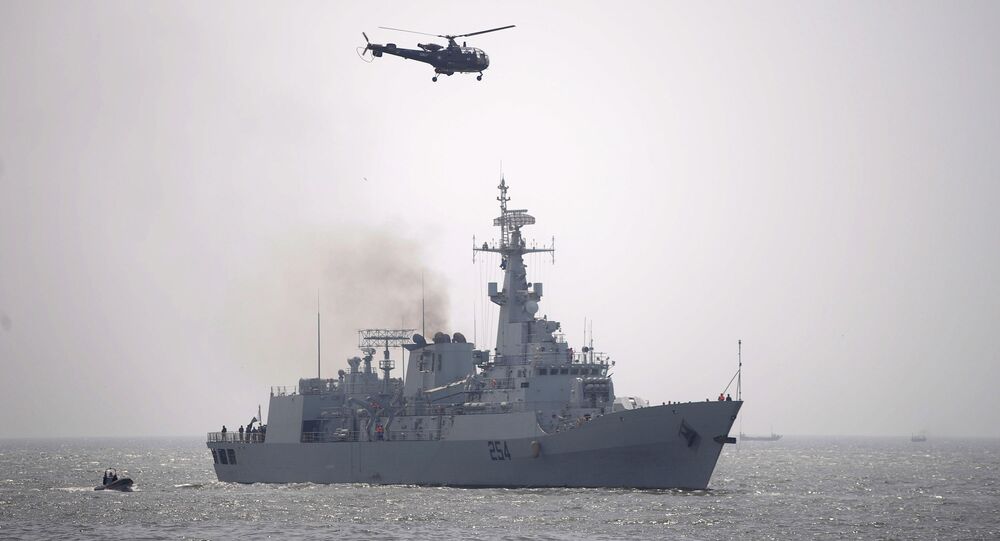 Indian naval movement into Pakistani waters is a realistic and serious threat to Pakistan. The Indian Navy has more teeth than its Pakistani counterpart buoyed by Russian-made aircraft carrier and nuclear submarines, according to a media report.

New Delhi (Sputnik): The Pakistan Navy has been forced to cancel all its overseas deployments since the Indian Navy increased its naval assets in the north Arabian Sea soon after the Pulwama terror attack. The current Indian naval presence in the Arabian Sea includes nuclear submarines according to a report in news portal Strategic News International.

The media outlet's intelligence sources monitoring the situation in Pakistan have revealed that in response to the Indian Navy's deployment of naval assets in the north Arabian Sea, the Pakistani Navy has been forced to station its naval assets along the Karachi harbour. It has undertaken continuous patrolling near its shores, in fear of Indian movements.

"Two Pakistani ships — PNS Saif and PNS Moawin — scheduled to visit Qingdao in China to join the 70th-anniversary celebrations of the PLA Navy, have cancelled their planned visit although the Pakistani Navy Chief is likely to be at the ceremony slated for April 24", Strategic News International reported quoting sources.

© AFP 2021 / STR
Pakistan Navy Foils Alleged Attempt by Indian Sub to Enter Pak's Waters (VIDEO)
Pakistan had earlier cancelled the visit of its ship PNS Aslat to the Langkawi International Maritime and Aerospace Exhibition (LIMA) held at Langkawi in Malaysia between March 26 and 30. The visit of PNS Shamsheer to Bahrain has also been cancelled.

The Indian Navy on 17 March confirmed that its major combat units including the INS Vikramaditya aircraft carrier-led battle group, nuclear submarines, and scores of other ships and other naval assets were quickly switched into operational deployment as tensions between New Delhi and Islamabad escalated.

The Indian Navy did not clarify which "nuclear submarines" had been deployed, although the Indian Navy presently has two kinds of nuclear-powered subs at its disposal: a single Chakra (Akula II) class attack submarine leased from Russia, and the INS Arihant, an Indian-made ballistic missile submarine capable of firing up to 12 submarine-launched nuclear ballistic missiles. The Navy also has some 14 diesel-electric subs.

Earlier in March, the Pakistani Navy released a video of what it alleged was an Indian submarine's attempt to enter Pakistani waters as tempers between the two countries flared.

The tensions between the two nuclear armed nations have escalated since mid-February when an alleged Pak-based terrorist group attacked a military convoy killing over 40 Indian soldiers. The Indian government blamed Pakistan for sponsoring terrorists and conducted an aerial strike on 26 February. That strike provoked a response from Pakistan the following day in which the two nations became embroiled in an aerial dogfight. Pakistan claimed that it had shot down two Indian fighter jets while India refuted the claim and said that only one fighter jet had been lost in the dogfight.