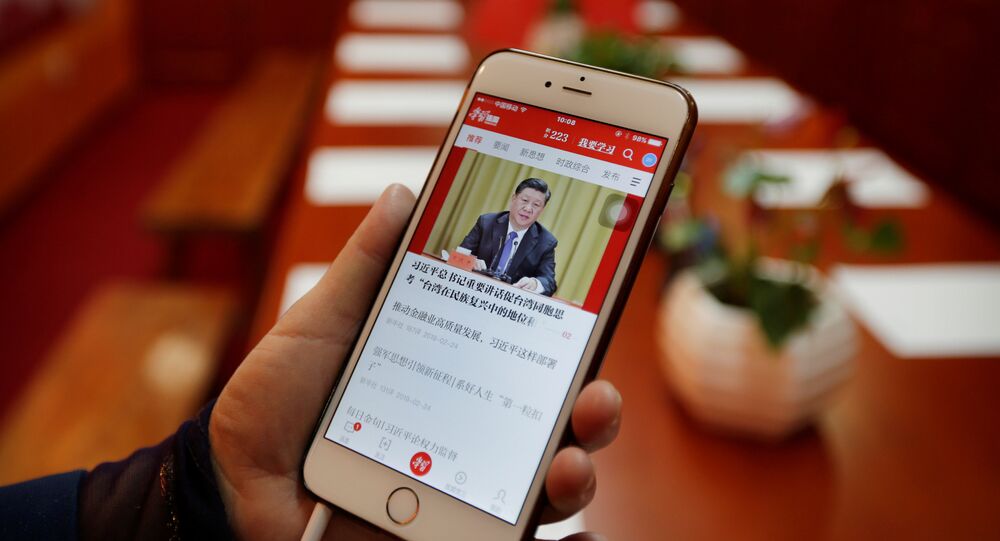 An online app detailing the thoughts and beliefs of the current Chinese president has been released into the wild by Beijing and many have found ways to use it as a means of obeying the rules of the Communist Party without doing any actual study.

Xuexi Qiangguo, a mobile app launched earlier this year, seeks to reward members of the nation's ruling Communist Party for echoing the musings of their leader, as well as studying the official version of the vast Asian nation's history and place in the world, according to a report by the South China Morning Post (SCMP).

The Central Propaganda Department of China's ruling Communist Party offered the Xuexi Qiangguo app — whose name translates in English to ‘Studying Great Nation' while simultaneously using the ‘Xi' character to suggest the influence of Xi Jinping in daily life — as an information aggregate that includes documentary, video and text covering the Chinese president's political philosophy.

© REUTERS / China Daily
First Orders of 2019: Xi Warns PLA be Ready for ‘Hardship, Crisis and Battle’
Communist party propaganda chief Huang Kunming noted earlier that the app will serve as a database to spread Xi's beliefs on government, military, diplomacy and domestic life, as well as providing speech transcripts and videos, according to SCMP.

With some 17 million downloads in the Huawei App Store and the current top spot in China's branch of the Apple app store, Xuexi Qiangguo offers video chat and the ability to send cash, while also providing study materials and subsequent testing that rewards users for correct answers, including repeating phrases such as: "Xi is the only right choice for us," according to Foreign Policy.

By means of an official directive, party members are tacitly required to download the app and must register using real names. After installation, the app requires access to the photos, videos and contacts of the user.

© AFP 2021 / STR
Beijing Plans to Build ‘City’ on ‘Blueprint’ Island in South China Sea
As with the interactive nature of the all-but-mandatory app's online services, particularly in China's closely-controlled internet environment, users are included in leaderboards that reveal whether they are doing their ideological homework — and some have chosen to use quietly available workarounds to give the impression of diligence, according to SCMP.

Not everybody wants to spend the time required to do the work to get the points that allow them to win the prizes, as well as being seen as an upstanding and useful citizen deserving of the benefits of party membership, according to SCMP.

"There is a sense of confidence that Mao's playbook could be followed with even better outcomes with the level of technology now," noted Shanghai-based political scientist Chen Daoyin, who suggested that Xuexi Qiangguo acts primarily as a tool to strengthen ideological control of the nation's populace.

© REUTERS / Larry Downing
US Seeks Open Access to Tibet From China - State Department
"Readers of the little red book were true believers of Mao," Chen observed, adding, "now they use the app only because they are told to," cited by SCMP.

Naturally, savvy app users have found methods of bypassing the work to get the rewards, as hackers offer plugins that enhance results by giving the surveillance and tracking embedded in the app false information.

In exchange for the opportunity to integrate proprietary services to a captive online audience, Chinese tech leader Alibaba contributed a significant amount of backend management for Xuexi Qiangguo, as well as permission to manage online cash transfers, resulting in a look and feel that far outsrips previous government forays into internet user tools, according to Reuters.

Referring to the Xuexi Qiangguo interface, one user gushed: "I can't believe it is produced by a government institution," cited by SCMP.

"It is so beautiful and fancy," the user added.