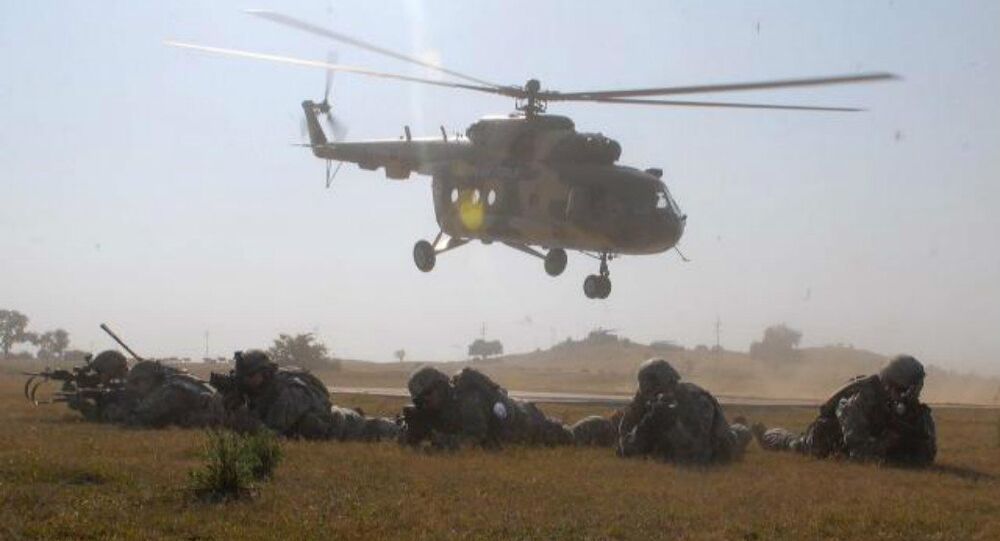 An Indian missile may have hit its own military helicopter on 27 February while trying to target 25 Pakistani fighter jets flying over its territory in retaliation to an Indian airstrike a day earlier in Pakistani territory to destroy alleged terror infrastructure.

New Delhi (Sputnik): India's air defence missile of Israeli-origin may have shot down its own Mi-17 V5 military chopper, following an alert on 27 February about 25 Pakistani fighter jets hovering over the border area that separates the two countries, reports the Indian daily The Economic Times.

The incident had occurred a day after the Indian Air Force (IAF) avenged the 14 February Pulwama militant attack by a Jaish-e-Mohammed (JeM) militant along the Jammu —Kashmir Highway on a CRPF troop convoy in which over 40 personnel were killed and many others left wounded.

The Mi-17 V5 helicopter lifted off from Srinagar airfield at 10:00 a.m. local time for a routine mission. The helicopter crashed around 10:10 a.m. near Jammu and Kashmir's Budgam district. All six Indian Air force (IAF) personnel on board were killed in the crash, a leading Indian daily reported on Friday citing the initial report.

© AP Photo / Shakil Adil
Aerial Clash With Pakistan Has Exposed Chinks in India's Armour - Editor
The investigation's focus is to determine "if multiple layers of safeguards meant to protect assets from friendly fire failed and how systems need to be improved to prevent any such incident in future", it reported.

The Indian authorities maintain that the IAF strike was carried out against suspected terror infrastructure operated by JeM, the Pakistan-based terrorist organisation that claimed responsibility for the Pulwama attack.

A day after the Indian side launched the air strike in Balakot (in Pakistan), the two nuclear armed nations engaged in an air clash, a first in five decades. According to reports, at least 25 fighter jets from the Pakistan Air Force tried to breach the border for a strike on military targets. A slow moving target like the Mi-17 V5 helicopter could be mistaken for a low flying armed UAV homing into an air base, said the media report citing sources.

The IAF has stated it wouldn't hesitate from initiating Court Martial proceedings against personnel found guilty in the inquiry.