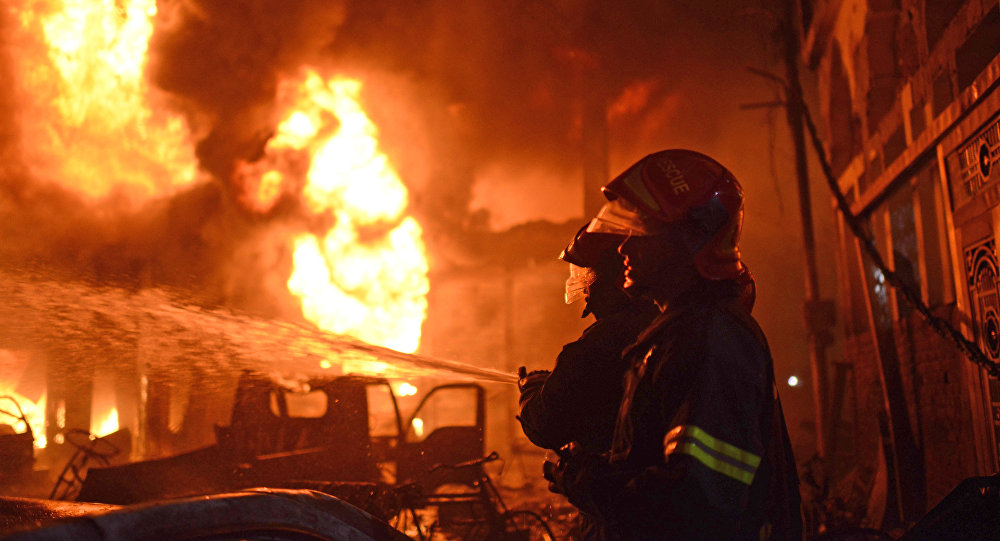 Occupants of the 19-storey office building trapped in the fire have been seen jumping down the building in desperation while some are clinging to wires outside windows while awaiting help.

Witnesses said people were seen shouting for help on the upper floors and now viral videos on social media show people falling from the building situated in Dhaka's commercial hub.

A #terrible and #devastating #fire has broken out in #Banani, #FRTower, multiple #casualties suspected, with people jumping off from the building to save themselves. #prayers for the poor souls. Warning #graphicvideo pic.twitter.com/xlNkoelh7n

The #Bangladesh #armedforces have joined in the #rescue effort, with the #AirForce using their #helicopters to drowse the #fire. #bananifire #FRTower #Banani pic.twitter.com/4yh1E686SP

​Authorities have not confirmed casualties, although, local reports and visuals confirm several people falling from the building trying to escape the fire.

Visuals show people climbing from cables on the exterior of the 19-storey building to escape the fire and there were also people waving to be rescued amid a thick cloud of smoke.

#bangladesh#fire Several people is trapped in the tower and some man break the window and slide down from the electric line. it is very dangerous pic.twitter.com/bzFdTUhjU0

​Local media visuals confirm the presence of emergency crews at the scene as well as military helicopters. It is feared that several people are still trapped in the building although no number has been yet put out by the administration.

Seventy people were killed in a similar massive blaze in Dhaka's old quarter. In another major disaster in 2010 in the Nimtoli area of Dhaka, 123 people burned to death.

#BreakingNews Many people are believed to have got trapped in the burning building while an unspecified number of panicked people suffered injuries as they jumped off its different floors for safety.#Bangladesh #bananifire pic.twitter.com/s5gKqgdQ2l