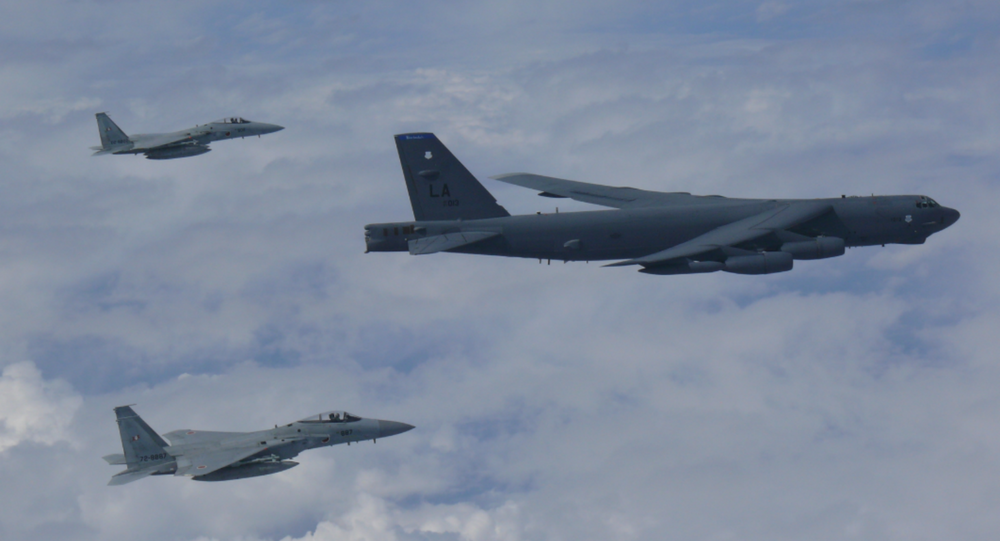 Two B-52H Stratofortress bombers with the US Air Force recently flew over the East China Sea for an "integration training" mission with the US Navy and the Japan Air Self Defense Force (Koku Jieitai).

A statement released by the US Pacific Air Force (PACAF) last week indicates that the two B-52 bombers departed from the US Andersen Air Force Base in Guam, and that they trained with F-15C Eagles assigned to the Kadena Air Base in Japan. The mission took place March 20. Additional details regarding the operation were not provided by the service.

Training missions and patrols of the contested waters are not unheard of, having become a regular exercise by American forces. The US' use of bombers in the region has been going on for more than 10 years as part of its Continuous Bomber Presence, a mission Washington says is "in support of a free and open Indo-Pacific."

Earlier this month, the US flew two B-52 bombers over the South China Sea on two separate occasions for "routine training missions." Those operations happened 10 days apart.

Most recently, a B-52 bomber departed from Guam on March 18 to "conduct simultaneous theater familiarization training in the Indo-Pacific and Europe." The latest training session saw bombers fly from Andersen Air Force Base "to an area east of the Kamchatka Peninsula before returning to base," reads a statement from the PACAF.

The March 18 operation included B-52 bombers from Louisiana's Barksdale Air Force Base that are operating out of the UK's Royal Air Force Fairford in Gloucestershire, England.

"Collectively, the flights from the Indo-Pacific and Europe demonstrated US commitment to allies and partners through the global employment of military forces," the PACAF said in a statement.

"While in theater, the bombers will conduct training with NATO allies and partners in order to enhance interoperability and readiness. The deployment of strategic bombers to the UK helps exercise RAF Fairford as US Air Forces in Europe's forward operating location for bombers."

"Strategic bomber missions enhance the readiness and training necessary to respond to any potential crisis or challenge across the globe," it adds.

According to The Diplomat, the US Air Force has been deploying its B-52 bombers to the East and South China Seas on a rotational basis since January 2018, when the bombers replaced the B-1B Lancer operating under the force's 9th Expeditionary Bomb Squadron. The B-1B Lancers first deployed to the area in February 2017.

Bomber flights over the East China Sea and South China Sea are frequently denounced by China, which is one of several claimants involved in island disputes within the contested waters. Other competing claimants include Taiwan, Vietnam, Malaysia, Brunei and the Philippines.

In November 2013, China established an air defense identification zone (ADIZ) within the East China Sea that included the Japanese-controlled Senkaku Islands, which are known as the Diaoyu Islands in China and are also claimed by Taiwan.

Neither the US nor Japan has recognized China's move, and several other countries, among them Australia, Germany and France, have stressed that the ADIZ raises the risk of an armed conflict in the region.

In the South China Sea, where an estimated $5 trillion worth of global trade passes through annually, China has repeatedly stressed that it's willing to kick things up a notch militarily in order to defend its territory. The threat has largely been disregarded by US military forces, who stress that American vessels are free to pass through the region as part of its freedom of navigation missions.