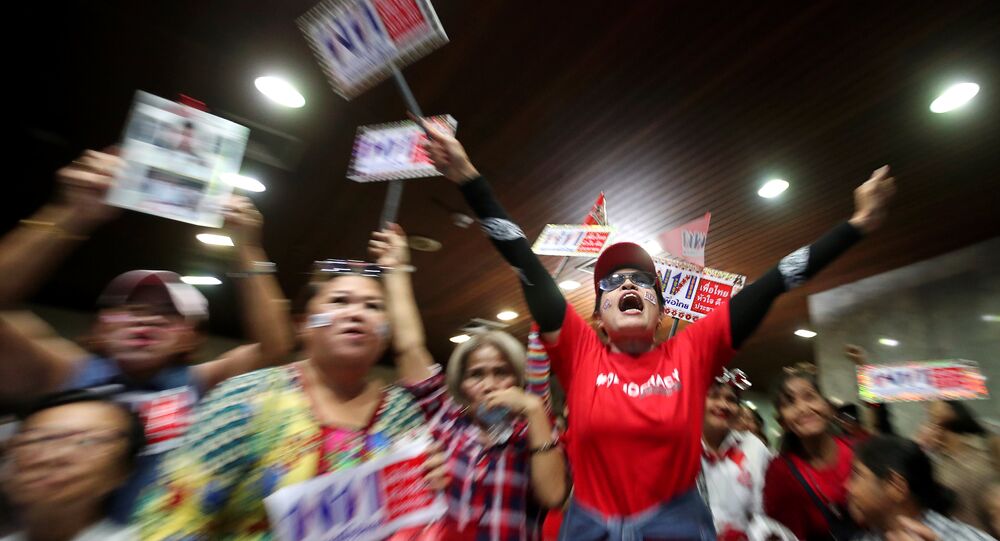 WASHINGTON (Sputnik) - The United States is calling for a speedy announcement of the Thai election results while standing prepared to work with the newly-elected government, State Department Deputy Spokesperson Robert Palladino told reporters.

"We stand with the Thai people in calling for an expeditious announcement of voting results and a fair and transparent investigation of any reported irregularities," Palladino said on Tuesday. "The United States looks forward to working with Thailand's newly elected government to advance values that bring our countries closer together including democracy, security, and prosperity for all citizens."

Thailand held its first general election since the 2014 coup on Sunday. In December 2018, the government lifted the ban on political gatherings and canvassing, which had been in force for more than four years.

"We congratulate the tens of millions of Thai citizens who participated in the long awaited 24 March election for demonstrating their strong support for return to elected government," Palladino said.

All 500 seats in the House of Representatives were up for grabs. The lower house of the Thai parliament chooses the next government together with the Senate, which is appointed by the Thai military.

Prime Minister Prayut Chan-o-cha, the head of the Thai military who led the coup, is the sole prime ministerial nominee of the Palang Pracharat Party, according to the Thai Public Broadcasting Service.

He was challenged by Sudarat Keyuraphan, the leader of the Pheu Thai Party, which supports Thailand’s ousted Prime Minister Thaksin Shinawatra; Abhisit Vejjajiva of the Democrat Party; and Thanathorn Juangroongruangkit of the Future Forward Party.

© AP Photo / TPBS
Thailand to Have 1st General Elections Since 2014 Coup With Record 9,200 Candidates
The head of the Thai national election commission, Jarungvith Phumma, said on Sunday that a very insignificant number of violations have been registered so far during Sunday's parliamentary elections in Thailand, including three cases of suspected vote buying and seven signals about spoiled ballot papers.

Phumma added that authorities were already investigating the claims about violations, noting that each alleged act of vote buying must be either recorded on video or captured on photos if perpetrators were not caught in the act by authorities.

Thai voters are also prohibited from taking selfies or photos at the polling stations because it can either hamper the voting process or could be considered as canvassing, which is prohibited on election day, if the photos depict one of the candidates, among other things.

Under Thai law, people who are found guilty of such serious violations as votes bribing or intentional spoiling of ballot papers for political motives may receive an up to five-year-long prison term and a fine.