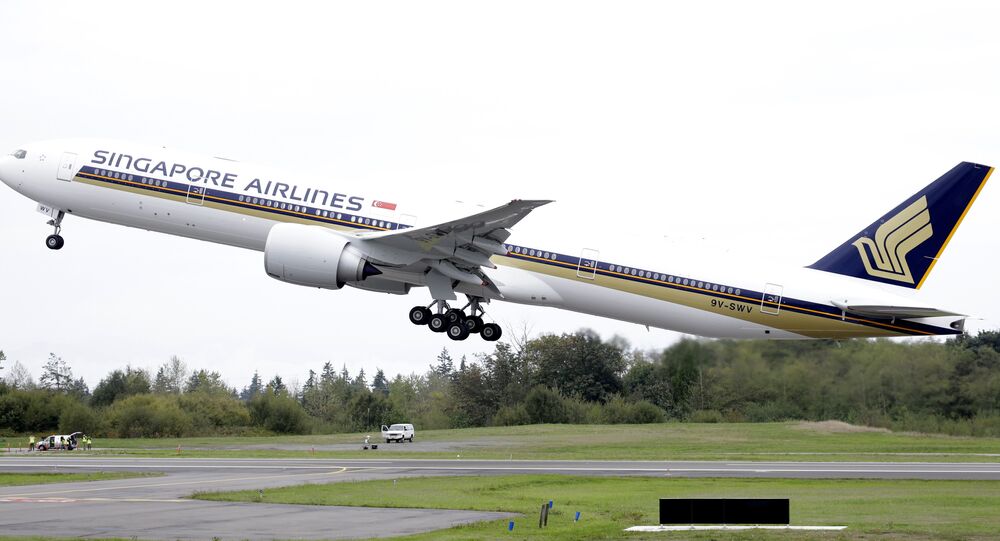 A bomb alert on a Mumbai-Singapore flight has forced a crew to perform an emergency landing, one woman and a child have been detained by the Singaporean police for questioning.

New Delhi (Sputnik): A bomb threat alarm was raised on Singapore Airlines Flight SQ 423 flying from Mumbai to Singapore in the wee hours of Tuesday. The alert ultimately turned out to be a hoax, reports media agency ANI.

Singapore Airlines confirms there was a bomb threat concerning SQ423 operating from Mumbai to Singapore. The aircraft arrived in Singapore on 26 March 2019 at about 0800hrs (local time). There were 263 passengers on board, assisting the authorities with their investigations

A Singapore Airlines flight landed safely at the Changi Airport in Singapore after the pilot raised a bomb threat alert that later turned out to be a hoax.

The Singapore-bound flight was carrying 262 passengers onboard.

© CC0
Grand Theft Avia: US Teens Hijack Plane After Stealing Tractor
The plane had taken off from Mumbai around 11:55 pm on Monday. A call warning that there was an inflight bomb on the plane was received by the airline shortly after take-off, the media report read citing The Straits Times.

Singaporean air force jets escorted the flight to Changi Airport at around 8:00 am local time where the flight had to make an emergency landing.

The disembarking passengers were made to go through security checks. The police have detained one woman and a child for questioning.

"Singapore Airlines confirms there was a bomb threat concerning SQ423 operating from Mumbai to Singapore. The aircraft arrived in Singapore on 26 March 2019 at about 0800hrs (local time). There were 263 passengers on board. We are assisting the authorities with their investigations and regret that we are unable to provide further details", said an airline spokesperson as cited in the media report.

Woman and child allegedly held back for questioning after bomb scare on SIA flight from Mumbai https://t.co/tNp4KM8UaO pic.twitter.com/CKjVe1boNG