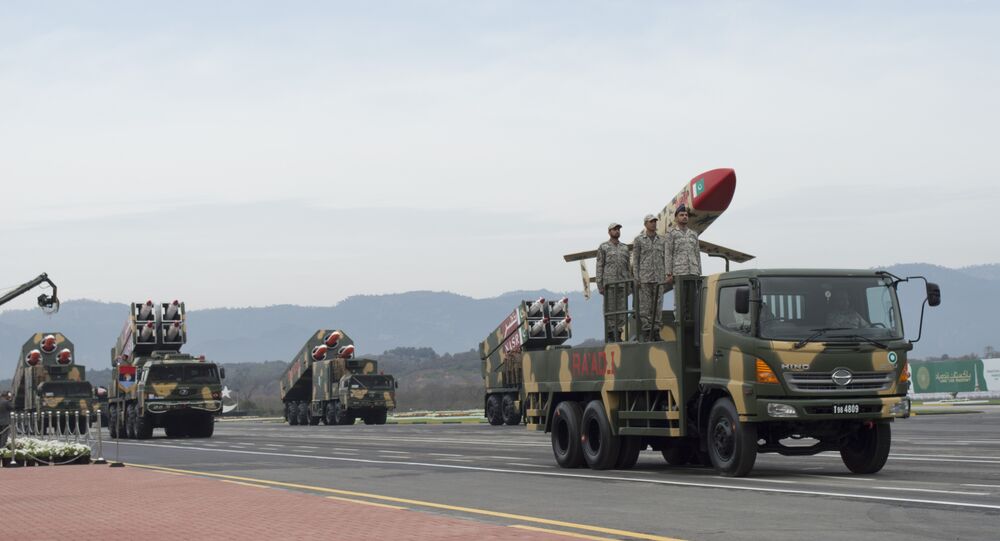 Pakistan Sees Nukes as Deterrence Method, ‘Insane’ to Talk About Use – Army

ISLAMABAD (Sputnik), Valentina Shvartsman - Pakistan is ruling out the possibility of using its nuclear weapons and sees them as more of deterrence tool to prevent actual wars, spokesman for the Pakistani Army Maj. Gen. Asif Ghafoor told Sputnik in an interview.

"Since we have gone overtly nuclear, as India also, in 1998, our stance is that this capability eliminates the possibility of conventional war between the two states. So that is to say, this is a weapon of deterrence and a political choice. No sane country having this capability would talk about using it," Ghafoor said.

The official noted that even though the protection of the country was of the utmost importance, it would be "insane" to discuss the use of nuclear weapons. He also pointed out Pakistan's will to takes steps towards non-proliferation of nuclear arms — but only if India does the same.

"Pakistan will undertake anything which is based on equality. You cannot tie the hands of Pakistan and keep India open. Anything that happens should happen for both countries," Ghafoor said.

Pakistan is negotiating defence industry cooperation with Russia in the areas of aviation, air defense systems and anti-tank missiles, spokesman for the  Asif Ghafoor told Sputnik in an interview.

The spokesman declined to clarify which items were on the agenda of the talks, but noted that Pakistan was open to various offers.

"Nothing is out. Anything and everything, which is possible to be purchased by Pakistan, will be done," Ghafoor said.

© AP Photo / Anjum Naveed
China Vows to Support Pakistan Amid Simmering Tension on Indian Subcontinent
The official further noted that Pakistan would welcome Russia's role in mediating the recently inflamed tensions between Pakistan and India."We would welcome any third-party mediation, which can bring peace in the region. And Russia is more than welcome," Ghafoor said.

According to the spokesman, Pakistan valued Russia's role in the Afghan settlement process and recognized Moscow's importance in regional processes.

"We greatly value the relevance and importance of Russia in the region, especially what role Russia has lately played toward the Afghan reconciliation… Russia looks toward balance of power and multipolarity in the world. We value Russia's voice as the voice of reason, and we would love if Russia, being a powerful country, plays its role which enables bringing peace in South Asia and beyond. And we expect that Russia will do it, as the efforts in fact being undertaken by Russia are generating good results," Ghafoor said.

On Alleged Use of US-Made F-16

"The aircraft which engaged those targets and fought them were JF-17. As regard to how to use F-16, in what context [they] were used or not — because at that point of time our entire Air Force was airborne — now it remains between Pakistan and the US to see how the MoUs regarding the use of F-16 have been adhered to or otherwise," Ghafoor said.

He noted that Islamabad was discussing the use of its JF-17 with the United States citing "friendly relations" with Washington, stressing, however, that the country would use whatever it deemed necessary if it came to "legitimate self-defense."

The official also shared Pakistan's account of the events that preceded the dogfight on February 28. According to Ghafoor, the Indian jets violated the Pakistani airspace on February 26, dropping payloads without inflicting any casualties or damage to infrastructure. Pakistan then, according to his words, decided to retaliate but chose not to threaten civilian lives.

"Next day, our Air Force, while staying within our own airspace, took four targets in India-occupied Kashmir… Being a responsible country, we could have caused damage even to the military installations or human life… But we had to show our will, capability and resolve. So what we did — we first chose the targets, and when the targets were locked by the aircraft, we shifted the point of impact to a safety distance where there was no infrastructure or human life, meaning thereby that we wanted to tell Indians that we had the capability to hit that military target, but in the entrust of the peace of the region we are only showing you our capability," Ghafoor said.

He added that Pakistan had the footage of this operation.

© AP Photo / Anjum Naveed
India, Pakistan Were on Edge of War After Kashmir Dogfight – Report
Earlier in March, media reported that the United States was looking into a possible violation of the terms of use of F-16 it supplied to Pakistan, as India claimed that the aircraft was used in the dogfight against Indian planes in late February.

The Indian airstrike came after a deadly attack by Jaish-e-Mohammad on the Indian paramilitary police force in Kashmir in mid-February. While India has accused Pakistan of supporting the militants and having a "direct hand" in the incident, Pakistan, in turn, has rejected the allegations.

Pakistani President: 'Responding to Indian Aggression Was Our Right'