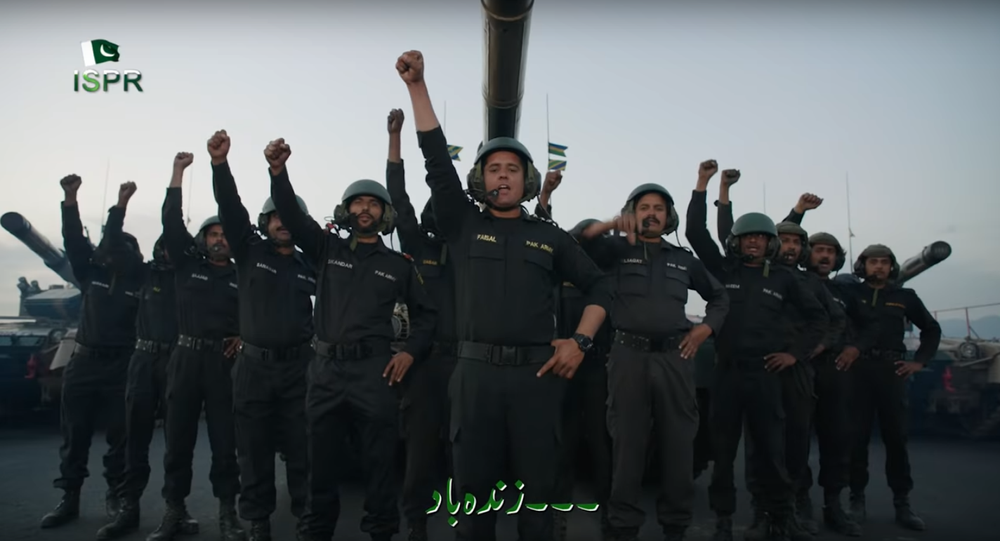 Tensions between the nuclear-armed neighbours continue to simmer following an Indian Air Force assault into Pakistani-controlled territory in Kashmir last month which sparked a long string of hostile back-and-forth rhetoric and military skirmishes.

The video features the generous use of troops and equipment from Pakistan's armed forces, including its F-16 fighter planes, and includes a montage of Pakistani planes destroying enemy aircraft interlaced with footage of Pakistanis cheering on an ISPR report of Indian planes being downed over Pakistani territory in Kashmir.

A virtual retelling of the Pakistani version of the events of the last few weeks, the video includes footage of Pakistani Prime Minister Imran Khan urging the release of a captured Indian pilot "as a gesture of peace," before showing a separate ISPR report of an Indian Army post "targeting innocent civilians" being "destroyed by Pak Army troops" along the Line of Control. The news-report style footage then shifts to the Pakistani Navy detecting an Indian sub, ominously combined with footage of a pair of anti-ship mortars being fired from a Pakistani warship.

The video is rounded out by footage of Pakistanis singing, dancing, celebrating and standing in solidarity with fists raised in resistance, as  Sahir Ali Bagga plays to a packed stadium.

The video, released Thursday, has gone viral, garnering over 420,000 views as of this writing.

© AP Photo / Dar Yasin
India to Skip Pakistan Day Reception Over Kashmiri Militants Invitation
Tensions between India and Pakistan escalated in mid-February, after a Pakistan-based terrorist group reputedly affiliated with al-Qaeda carried out a deadly car bombing attack against Indian security forces in Kashmir, killing at least 40. The Indian military responded with airstrikes against a suspected terrorist training camp on the Pakistani side of the border in Kashmir on February 26. The next day, the Pakistani Air Force scrambled fighters to counter a second Indian incursion, leading to a dogfight in which at least one Indian MiG-21 and one Pakistani F-16 were downed. Tensions have remained steady ever since, with regular reports of airspace violations, military drills held in sensitive border areas, and back and forth ceasefire violations including small arms and artillery fire along the Line of Control.
...
Reddit
Google+
Blogger
Pinterest
StumbleUpon
Telegram
WhatsApp
103