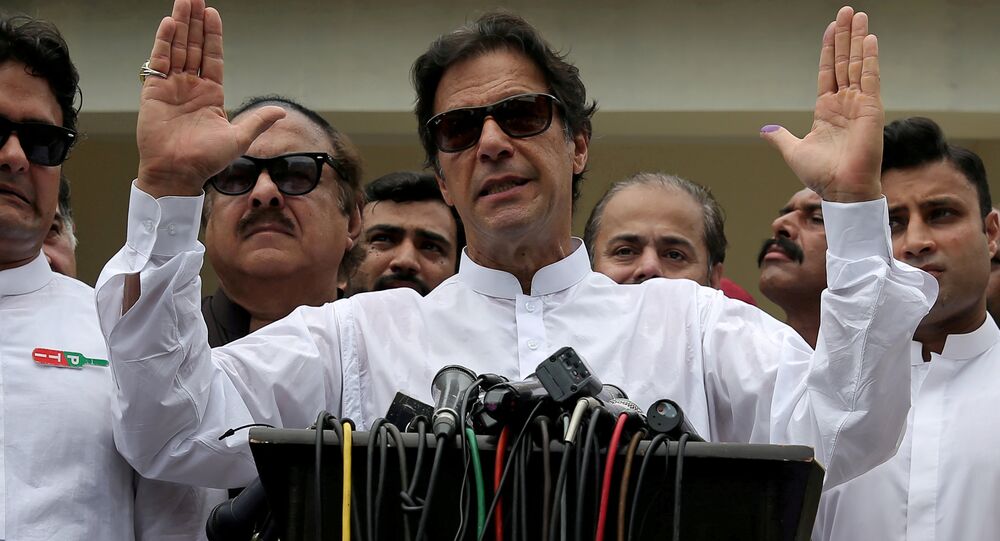 Narendra Modi’s BJP has made terrorism one of its election planks as the party gears up to seek its second five-year term in office. Indian voters are going to elect new members to the lower house of Parliament in seven-phased polling starting 11 April, and results will be declared on 23 May.

New Delhi (Sputnik): Pakistani Prime Minister Imran Khan has opined that since Indian Prime Minister Narendra Modi's popularity is rapidly shrinking, he could plan any "misadventure" to remain in power, adding that Pakistan should remain alert till the Indian elections are over.

"The armed forces, government and people of Pakistan are ready for any challenge. A fitting response would be given to any aggressive move," Imran Khan said in an informal interaction with Pakistani journalists.

The Pakistani PM also indicated that he had intelligence inputs about Indian activities in Balochistan after the 14 February killing of 40 Indian soldiers in Pulwama of India-administered Kashmir.

"There are intelligence reports of the enemy's terrorist activity increasing in Balochistan post-Pulwama," Imran Khan added.

Balochistan, a province in southwestern Pakistan, has been grappling with a long-drawn armed insurgency by Baloch nationalists.

© REUTERS / Mukesh Gupta
'Dangerous': US Reportedly Warns Pakistan Against Another Terrorist Attack on India
Narendra Modi's Bharatiya Janata Party has made terrorism one of the strong planks on which it is hoping to win the upcoming general elections, polling for which will start on 11 April and the declaration of results expected by 23 March.

On Friday, opposition leader Sam Pitroda started a controversy by saying "Incidents like Pulwama happen all the time, Pakistani cannot be blamed for that," to which Prime Minister Narendra Modi fired back by describing the opposition Congress party as "terror apologists."

"Loyal courtier of Congress' royal dynasty admits what the nation already knew- Congress was unwilling to respond to forces of terror. This is a New India- we will answer terrorists in a language they understand and with interest!" Prime Minister Narendra Modi said while criticising the Congress party for its alleged inaction on terror during its term.

Loyal courtier of Congress’ royal dynasty admits what the nation already knew- Congress was unwilling to respond to forces of terror.

This is a New India- we will answer terrorists in a language they understand and with interest! https://t.co/Mul4LIbKb5

Finance Minister Arun Jaitley, another senior BJP leader, also argued that "there is a distinction between the non-state actors and state actors in Pakistan."

"Non-state actors are an extended limb of the state actors in Pakistan," Arun Jaitley was quoted by the Indian media as saying.

Unfortunate such people are ideologues of a political party: @arunjaitley on Sam Pitroda’s remark

The Indian government's policy was to "fight terrorists when they come to the country […] Now, we go and strike at the point of origin of terror," Jaitley said, adding that this approach of the Indian government has received support from the international community.

Tensions between Indian and Pakistan escalated on 14 February when an explosive-laden car rammed into a security convoy on a highway in Pulwama of Jammu and Kashmir, killing 40 soldiers. Subsequently, on 26 February, India launched an airstrike inside Pakistani territory destroying a terror camp in Balakot — a claim which Pakistan ardently denies. Both sides have kept their forces on high alert with aerial exchanges and cross-border firing being reported sporadically.