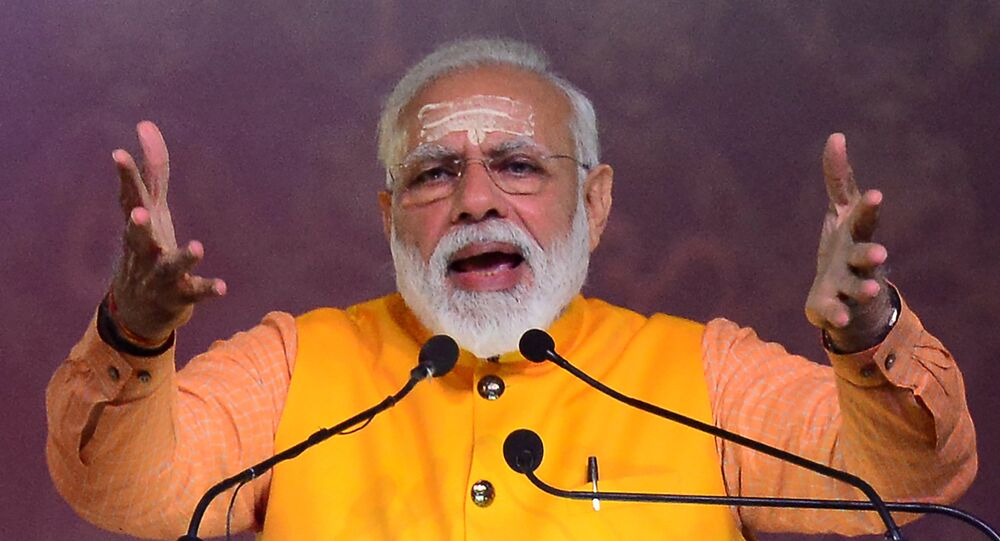 Going by a survey conducted by IANS and poll analysis group C-voter, in terms of satisfaction with the PM's work, there is not much change, with over 50 percent of respondents remaining in the “very satisfied” category. However, his net approval rating in the 60 percent-range during the first week of March has come down to 56 after the second week.

New Delhi (Sputnik): Indian Prime Minister Narendra Modi is topping the popularity charts as he hopes to trump his rivals in the upcoming general elections, polling for which will be held in phases across the country starting 11 April, according to a survey.

"Even a fortnight after the air strike by Indian Air Force fighter jets on terror camps in Pakistan's Balakot, Prime Minister Narendra Modi continues to dominate the popularity charts despite a dip in his rating from the peak witnessed during the first week of March, but his distant rival Rahul Gandhi has shown only marginal signs of recovery", a report by IANS reads.

© REUTERS / Anushree Fadnavis
Pakistan: India Claims F-16 Was Downed for Political Gains as Election Looms
Although Modi continues to be the most popular choice, the survey for which the data was collected up to 14 March, showed that Modi's rating has begun to slide from the high of around 60 percent seen on March 4, 5, 6 and 7, coming down slightly to around 56 by the middle of the month of March.

The results of the survey are part of the "state of the nation" conducted by the two agencies in the run-up to the seven-phased Lok Sabha polls, slated to begin on 11 April and the results of which will be announced on 23 May.

Indian Observers to Keep an Eye Out on Bangladesh Elections