Right-wing political commentator Milo Yiannopoulos believes that the attack on two Christchurch mosques was provoked by the establishment "pandering" to extremists on the left - a point of view Australia's immigration authorities deemed to be "appalling" and inciting hatred.

Yiannopoulos has lashed out at Australian officials, who denied him a visa for his comments on the New Zealand mosque shootings.

"[Australian Immigration Minister] Coleman and his [Liberal] party deserve to be annihilated at the next election for their betrayal of such fundamental western values as free speech and for cravenly folding to pressure from the left," the angry polemicist wrote on Facebook.

The Department of Home Affairs said in a statement on Saturday that his comments are "appalling and foment hatred and division", despite Yiannopoulos saying that he is "explicitly" against violence.

A gunman killed 49 people with an automatic rifle at two mosques in Christchurch, New Zealand on Friday. In a manifesto published online before the shooting rampage, he called himself a "fascist" who wanted to repel an "invasion" of Muslims, who he said were gradually replacing white people with lower birth rates.

The attacker emblazoned his weapon and ammo with writings of historic figures and people who fought against foreign "invaders" at some point, whether it be a medieval Balkan nobleman who led an uprising against the Ottoman Empire or an Italian neo-Nazi who shot African migrants.

He also mentioned right-wing US commentator Candace Owens as the person who "influenced [him] above all".

Yiannopoulos, who once famously claimed that all Muslims should be deported to the Middle East, said that the Christchurch tragedy was inspired by the policies pursued by the powers that be.

"Attacks like this happen because the establishment panders to and mollycoddles extremist leftism and barbaric, alien religious cultures," the former Breitbart editor said. 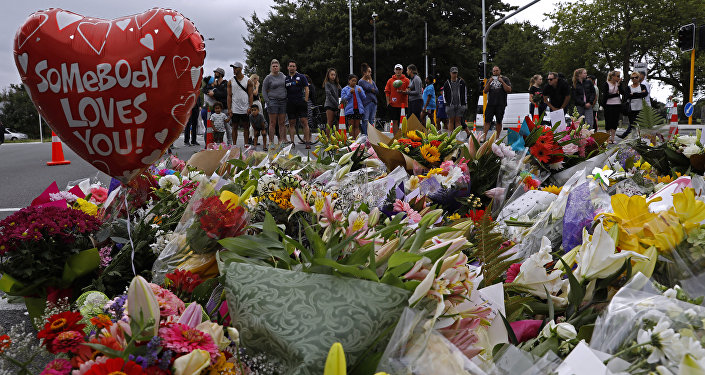 He also defended Owens, saying that she "had nothing to do with what happened in New Zealand" because people "aren't radicalised by their own side" — implying that it was the left-wing that provoked the shooter.

Yiannopoulos, who has a strong Australian following, was going to visit the country on a speaking tour, but has had his visa application rejected.

In a letter to the public speaker, the Department of Home Affairs cited violent scenes during his 2017 Melbourne event, when protesters clashed outside the venue.

"Victoria Police issued Mr Yiannopoulos with a bill of $50,000 for the cost of policing his event in Melbourne," the department said, as quoted by the Guardian, adding that he has since not paid his security bill and may not be allowed into the country.

Officials also indicated that Yiannopoulos may not meet the character requirements, which is part of the visa application.