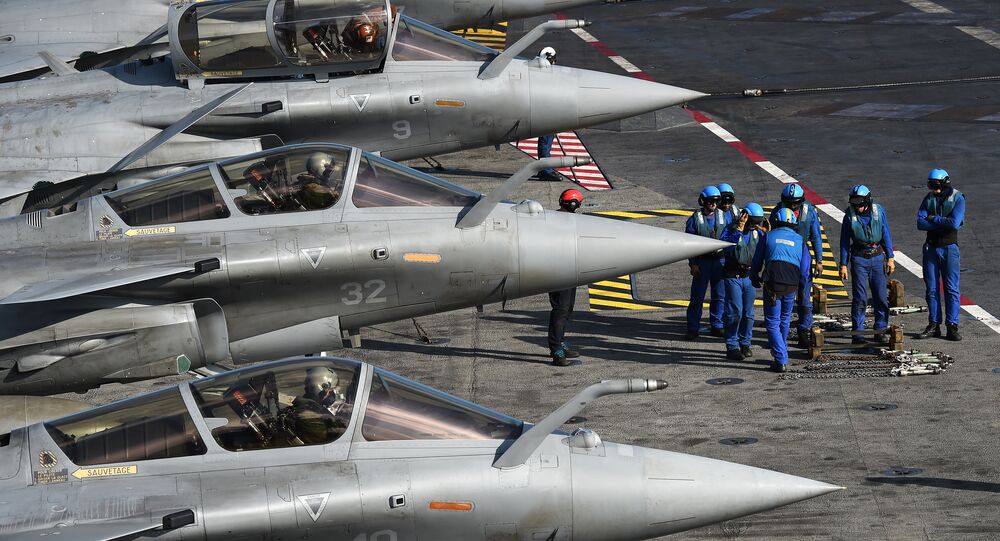 While India’s apex court is hearing a petition seeking a review of its earlier verdict on the Rafale deal corruption case, the government has argued that the papers submitted as proof in court had been “stolen” from the Defence Ministry and that by doing so the conspirators had compromised national security - an act that attracts penal action.

New Delhi (Sputnik) — The Indian government has claimed that the leaking of documents pertaining to the Rafale deal, published by the newspaper The Hindu, not only breached terms of the agreement with the vendor, but also compromised national security. Filing an affidavit before the country's apex court on Wednesday, the government claimed that photocopies of the sensitive documents were done without consent, permission or acquiescence of the centre, "…thereby committing theft by unauthorized photocopying of such documents have adversely affected sovereignty, security and friendly relations with foreign countries".

© AFP 2020 / ANNE-CHRISTINE POUJOULAT
Indian Government Retracts 'Stolen File' Statement on Rafale Fighter Jet Deal
The government has alleged that the documents attached in review petition by the plaintiff and subsequently accessed and published by media outlets, including The Hindu, carried sensitive information, including related to the aircraft's combat capability.

"Since the review petition has been widely circulated and is available in public domain, the same is available to the enemy/our adversaries. This puts the National Security in jeopardy", the affidavit submitted to the Supreme Court of India reads.

The government has also informed that it has launched an internal probe to ascertain how the "secret" Rafale files were leaked from the Defence Ministry.

Meanwhile, the former editor of The Hindu, N. Ram, has sought to exonerate his journalists from any wrongdoing, arguing that they had published the Rafale report in the public's interest and that the act enjoyed protection under relevant laws.

© AFP 2020 / PATRICK BAZ
Top Indian Court to Review its Earlier Judgement on $8.7 Billion Rafale Deal
Earlier, on 6 March, the government alleged that the documents presented in court by the plaintiff had been "stolen" from the Defence Ministry.

The review petition, which is currently being heard by the Supreme Court of India, pertains to the 14 December judgment over the procurement of 36 Rafale fighters from French manufacturer Dassault Aviation, in which the court had given the Modi government a certificate of exoneration. The clean chit was given in response to several petitions seeking a court-monitored probe into the purchase of the Rafale jet fighters, alleging that the contract was awarded to Dassault Aviation in exchange of agreeing to award the offset contracts to certain industry players allegedly favoured by Prime Minister Narendra Modi.