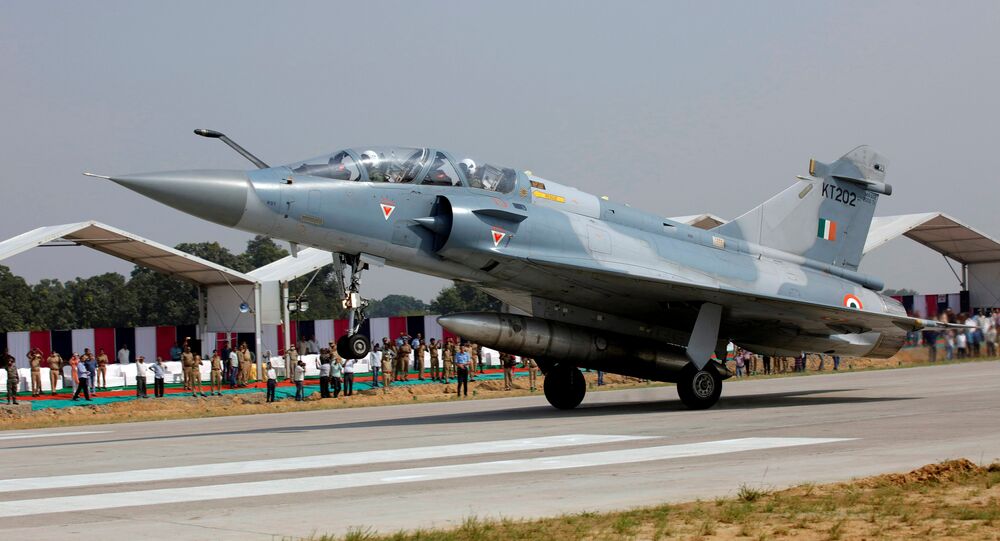 The clarifications come amid allegations from the Pakistani prime minister and his party that tensions along the Indo-Pakistan border were fomented by India’s governing dispensation to gain electoral advantage.

New Delhi (Sputnik) — Indian Defence Minister Nirmala Sitharaman has denied the allegations made by Pakistan that the Narendra Modi government conducted the air strike to bolster its chances in winning the upcoming general elections. Nirmala Sitharaman reiterated that it was the intelligence input that forced the government to take action against the terrorist infrastructure in Balakot, located inside Pakistan.

"There is no relationship between the airstrike and elections. It was based upon intelligence inputs on terrorist activities in Pakistan, to be unleashed against India. It was not a military action", Nirmala Sitharaman, India's minister of defence said on Tuesday.

© AFP 2020 / NARINDER NANU
Website of India's Ruling Political Party Hacked Amid Row With Pakistan
Pakistan's Prime Minister Imran Khan had alleged that the Indian government went on to escalate tensions at the border and create war hysteria to win public support on nationalistic grounds for the upcoming general elections. Pakistan's Prime Minister Imran Khan's party, Pakistan Tehreek-e-Insaf (PTI), shared some strong words against his Indian counterpart Narendra Modi on 28 February and asked the people of India to not let one man use border tensions for political mileage.

READ MORE: Modi Lashes Out at Opposition After Rafale Jets Remark Amid Row With Pakistan

"We hope you understand that you were manipulated into warmongering. Let better sense prevail; isolate the people who are desperate to win an election. War is in no nation's interest and its soldiers and civilians who are the collateral damage. Don't let one man use it for political mileage", PTI tweeted on 28 February.

In a follow-up tweet, PTI went further in its straight-up attacks against Modi again. Their tweet read "… a desperate bid to win an election by one man is gripping an entire nation in war hysteria". Naming Modi again, it added that "war is no one's interest except Narendra Modi; whose escalating ego is reminiscent of dictators who started world wars". The tweet was also tagged with the #SayNoToWars hashtag.

Indian Prime Minister Modi and his party leaders have been talking about air strikes conducted on 26 February in Balakot inside Pakistan at every election rally and have launched sharp attacks on opposition parties for demanding evidence on the said strikes.

"At a time when our army is engaged in crushing terrorism, inside the country and outside, there are some people within the country who are trying to break their morale, which is cheering our enemy," Modi said at an election rally on Monday. "I want to know from (the opposition) Congress and its partners why they are making statements that are benefiting the enemies", added Modi.

© AP Photo / Mahesh Kumar A.
Modi Vows to Make 'Big, Bitter Decisions' as India Reportedly Downs Pak Drone
Pollsters have been predicting that pitching the "national security" issue at full throttle during election time is most likely to provide major gains to the governing Bharatiya Janata Party (BJP), which was struggling to win a majority in most of the opinion polls conducted before the tensions with Pakistan. The Modi government was on the back-foot on issues ranging from unemployment, slowing economy and suspected corruption in the $8.7 billion Rafale fighter jet deal with France.

"Maybe it's too early to analyse the electoral impact, but we are getting reports from all over that literally dozens of aspirants who were nurturing their respective constituencies hoping to contest for the member of parliament elections against BJP have virtually withdrawn over the last week!" Praveen Patil, founder and CEO of 5Forty3 Datalabs, an opinion poll consulting firm, told Sputnik.

The recent tensions between India and Pakistan flared up last month when the Indian Air Force conducted an air strike on 26 February against a suspected terrorist camp in Balakot, located inside Pakistan. The Indian government had claimed that the strike was a pre-emptive non-military strike and was in retaliation for a 14 February terrorist attack, when a Jaish-e-Mohammad terrorist blew himself up in front of a paramilitary convoy in Pulwama, in the Indian state of Jammu and Kashmir, killing over 40 security personnel.