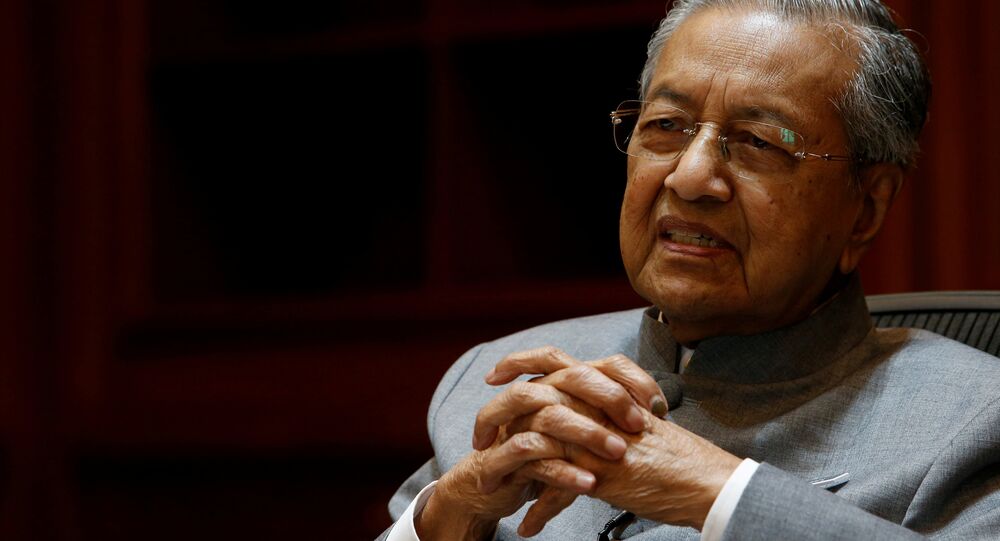 There have been at least two grand search operations to find the doomed flight, with the latest, conducted by American firm Ocean Infinity, spanning 90 days and covering a staggering 112,000 square kilometres of the Indian Ocean. However, nothing has yet given a clue to resolve the plane’s “unprecedented disappearance”.

"For as long as there is hope, we will continue to think of ways and means to find out" the plane's fate, he told 9 News Australia journalist Sarah Abo in the presence of a widow and MH370 families’ advocate Danica Weeks, adding that they “intend to continue” the endeavour.

"Losing an aircraft is one thing, but losing people is something else”, Mahathir went on to say. “You can't sleep thinking about what has happened, you keep on asking yourself that question and you get no answer”, the premier added.

As PM Mahathir has never met with the relatives of those who vanished on the doomed flight, and even baffled his aides when he agreed to discuss a potential resumption in the search for the plane with the victim’s relative. Weeks’ husband was one of the passengers who boarded flight MH370 in Kuala Lumpur, but never reached his destination of Beijing.

“Please don’t give up on us”, Weeks said in an emotional plea to the prime minister.

“One of the things that I heard from the very beginning was that the plane was hijacked”, Prime Minister Mahathir continued, noting, however, that such a large plane going down in the sea anywhere or on land “must leave signs”.

“Here, there is absolutely no evidence. It's strange. It's as if the plane just vanished”, he said.

Addressing the explanation deemed the most plausible by international experts – about a hijacking and subsequent act of mass murder committed by its own pilot, Captain Zaharie Ahmed Shah, Mahathir asserted:

“I cannot think that a person who has been flying for so long, a very senior pilot, would want to do that. I don’t know how he can make it disappear”, he said thereby dismissing the speculation about the pilot’s role.

Transport Minister Has His Say

Meanwhile, Malaysian Transport Minister Anthony Loke, who has refused all other interviews regarding MH370, spoke exclusively to 60 Minutes about the possibility of resuming search efforts for the missing plane.

“We are committed to resume the search if there is credible evidence, and we would like to see that we can find the plane, and to give closure to the families”, he told reporter Sarah Abo.

"If there is a proposal and credible leads, then we are prepared to look at it. It's not as if we are sitting here and doing nothing”, he went on to say that they “are more than willing to restart it, if convinced the new technology can be more efficient in the search”.

The official search for MH370, carried out by Malaysia, China and Australia, was called off in January 2017, after costing upwards of $150 million.

A second search, carried out on a no-find, no-fee basis by US-based firm Ocean Infinity, ended last year after a 90-day combing of 112,000 square kilometres of the southern Indian Ocean, including the ocean bottom bore no fruit.

In summer 2018, Malaysian authorities said they had failed to determine the cause of the plane's disappearance, though they did rule out several possibilities. The lead investigators reported that MH370 must have reversed toward Malaysia under manual control. However, it wasn’t determined with certainty if the plane was being steered by the pilot, or if there had been any illicit interference, leading to such an “unprecedented disappearance in commercial aviation history”.