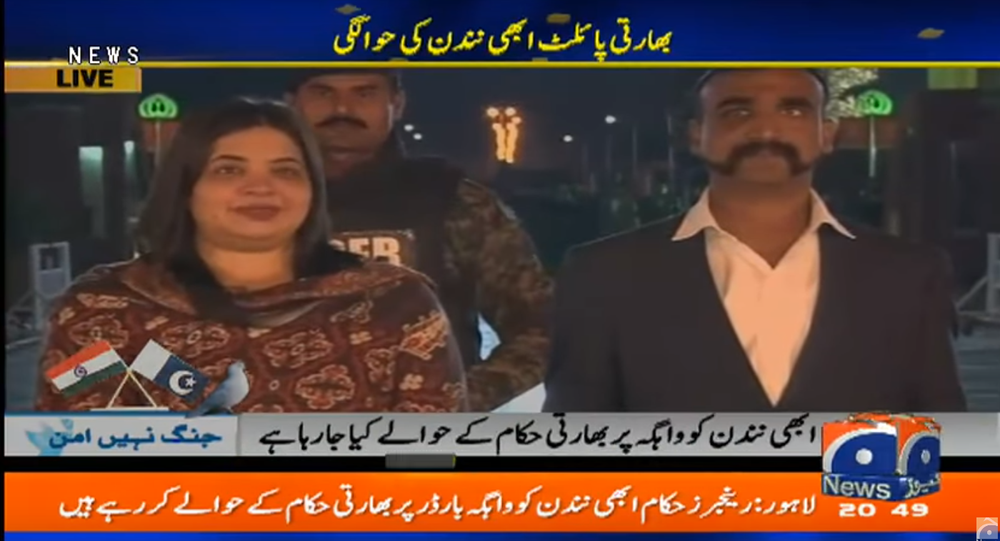 Wing Commander Abhinandan Varthaman was captured after his MiG-21bis was shot down over Pakistan on Wednesday amid escalating tensions in the contested Kashmir region.

Pakistani television has released the first footage of the pilot standing at the Wagah border between the two countries, before crossing over to the Indian side.

The clip shows the pilot, escorted by armed soldiers, as he stands against the background of a large fluttering Pakistani flag, with troops seen walking around with paperwork. The closed border fence between the countries is eventually opened, and Abhinandan walks into India, where he is met by multiple armed Indian troops.

© AFP 2020 / STR
India to Give US Proof Pakistan Used F-16 Jets in Kashmir Air Battle - Reports
Pakistani Prime Minister Imran Khan earlier said that the planned handover of the pilot back to India would be a "peace gesture."

Earlier Friday, the Pakistani government tweeted a video address by the officer, where he reportedly praised the "professionalism" of the Pakistan Armed forces, and "regretted the role of the Indian Media for creating war hysteria." The tweet has since been removed, but was copied by other users.

"I see peace in it. I have spent time with the Pakistani Army. I am very impressed…" Abhinandan  could be heard saying in the clip.

Abhinandan was held by Pakistani security forces for two days after his plane was downed over the country's airspace in Kashmir. Soon, footage of his capture seemed to indicate that Pakistani forces had saved him from an angry mob looking to kill him.

© CC0
Pakistan in Contact With Global Powers Over Standoff With India - Spokesperson
During his time in custody, Abhinandan said he was "very impressed by the Pakistani Army" and how they treated him, and promised that he would "not change" his statement after returning to his home country.

Tensions between India and Pakistan exploded this week after the two countries' warplanes engaged in skirmishes in Kashmir on Wednesday following an Indian attack on a jihadist camp on the Pakistani side of the Line of Control a day earlier. The firefight reportedly led to the downing of two Indian planes, including Abhinandan's MiG-21, as well as a Pakistani F-16. The border situation remains tense on Friday, with sources telling Sputnik that the two countries' border troops were exchanging "heavy fire" across at least eight border points.