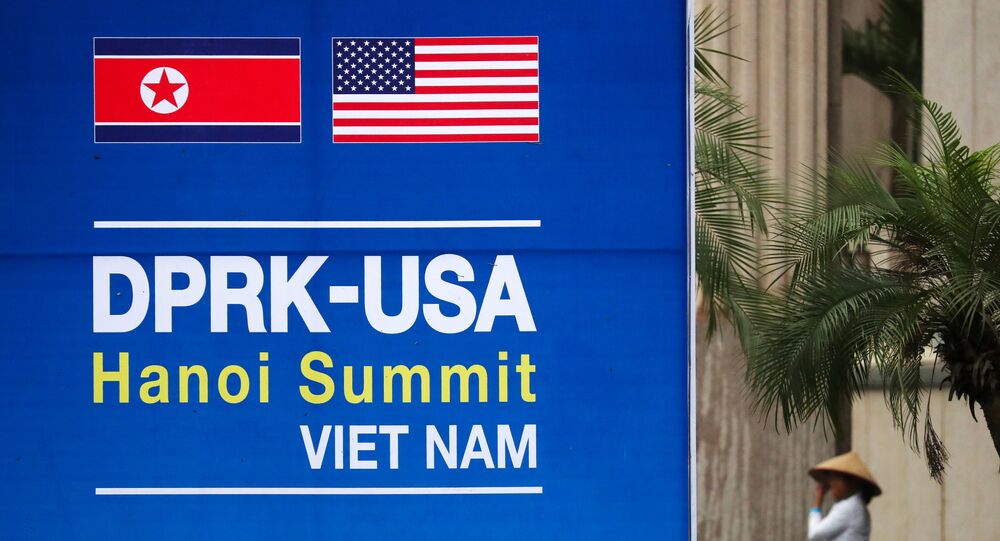 North Korean leader Kim Jong-un made a surprise change of hotel to one that had originally been planned as the US press center after arriving in Hanoi, capital of Vietnam on Tuesday.

US President Donald Trump is scheduled to arrive Tuesday night, as Hanoi becomes the focus of the world over the next two days. At about 5 pm on Tuesday, Kim's motorcade left the Melia Hanoi Hotel and 5 minutes later arrived at the North Korean embassy in Hanoi, where Kim was greeted with great shouts of joy and hurrah from people inside the embassy, before he walked into the compound and went upstairs under protection.

Almost at the same time, the US side transported the journalists who signed up with the White House to the Noi Bai International Airport in Hanoi to wait for the arrival of Air Force One. According to the White House, Trump is scheduled to arrive at 9:15 pm local time.

© REUTERS / Leah Millis
Hanoi Summit, US Congress’ Peace Bill Signal Real Possibility of Peace in Korea
"Due to technical issues, the White House Press Filing Center will be relocated to dedicated space inside of the International Media Center," according to a White House email sent to journalists about 90 minutes before Kim's arrival at the hotel.

Many journalists began moving to the Viet Xo Friendship Cultural Labour Palace, a giant Soviet-era edifice a few blocks from Kim's hotel. More than 3,000 journalists from around the world including US, Vietnamese and South Korean government-related media are attending.

Some journalists privately speculated that Kim was trying to send a signal to the world that he will not play by US rules and can dominate the process as long as he wants. But the surprise change just a few hours before Kim's arrival could also be out of security concerns, said Zheng Jiyong, director of the center for Korean studies at Fudan University in Shanghai. To attract shoppers, tourists and journalists, some stores in downtown Hanoi are selling T-shirts with pictures of Kim and Trump, many featuring last year's handshake in Singapore.

© AP Photo / Evan Vucci
'Large Disparity': Trump-Kim Hanoi Summit Unlikely to Break New Ground - Expert
Motorbikes are everywhere in Hanoi and some drivers have decorated their motorbikes with national flags of Vietnam, North Korea and the US. A rider told the Global Times on Tuesday that after dousing his bike with flags, he and friends will circle around the city to show their welcome to the two leaders as they want to deliver a message to the world that Hanoi is a city of peace and they hope the two leaders can reach an agreement.

The Hanoi summit on Wednesday and Thursday will consist of a one-on-one meeting between Trump and Kim and expanded talks with their respective delegations. A joint statement is expected to be issued after the meeting.

Will The Trump & Kim Bromance End in Denuclearization or Political Stalemate?